Some people have likened the footage to scenes from Squid Game or the Hunger Games franchise. 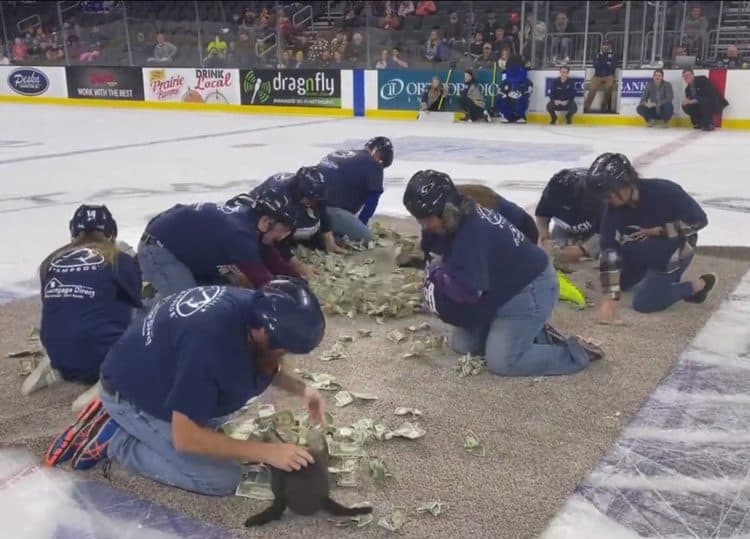 A viral video has caused outrage in the US after it showed teachers scrambling for dollar bills in order to fund school supplies in what has been described as a “humiliating” challenge.

South Dakota newspaper the Argus Leader reported $5,000 (£3,770) in single dollar bills were laid out on the ice skating rink during the Sioux Falls Stampede hockey game on Saturday night, and the teachers from nearby schools competed to grab as many as possible in less than five minutes.

The money was reportedly donated by CU Mortgage Direct to fund teaching supplies and classroom repairs.

Footage of the competition that went viral on social media showed teachers stuffing the notes down their jumpers and into hats while the audience cheered.

The company and the Sioux Falls Stampede later apologised for the competition, following widespread backlash.

“Although our intent was to provide a positive and fun experience for teachers, we can see how it appears to be degrading and insulting towards the participating teachers and the teaching profession as a whole,” they said in a joint statement.

Earlier, American Federation of Teachers president, Randi Weingarten, tweeted that the display was demeaning. “This just feels demeaning … teachers shouldn’t have to dash for dollars for classroom supplies,” she said. No doubt people probably intended it to be fun, but from the outside it feels terrible.”

On social media the “dash for cash” footage was described as “humiliating” and “dystopian”. Some people likened the footage to scenes from Squid Game or the Hunger Games franchise.

Related: Obama in discussions with Starmer and Lammy amid optimism over Labour’s chances at next election