The ad stated “Uber - unsafe for passengers, unsafe for road users” and featured a hand reaching from a car window to grab a woman's purse from her handbag 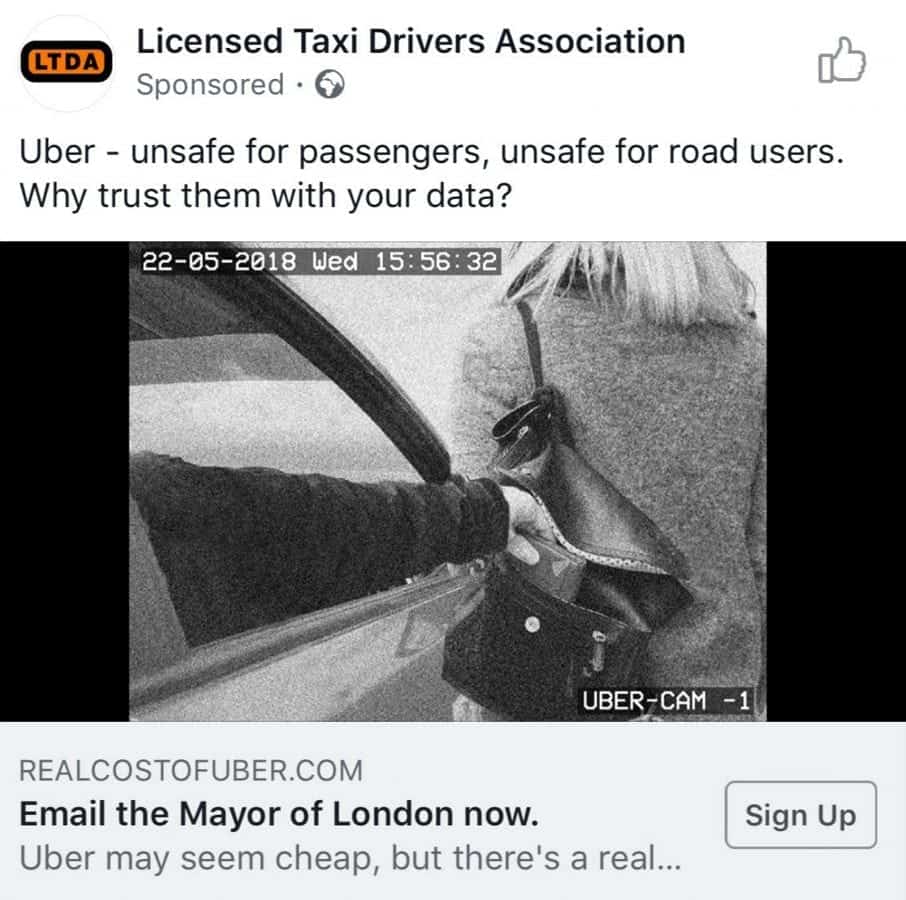 A taxi driver group’s Facebook ad has been banned for “denigrating” rivals Uber.

The ad stated “Uber – unsafe for passengers, unsafe for road users” and featured a hand reaching from a car window to grab a woman’s purse from her handbag.

Watchdogs launched an investigation after receiving a single complaint.

The ad was found to be in breach of rules regarding imitation and denigration, and was banned from being used again.

The Facebook post in May, paid for by London-based Licensed Taxi Drivers Association (LTDA), said: “Uber- unsafe for passengers, unsafe for road users. Why trust them both with your data?”

Beneath that text, a photo which looked like a CCTV image depicted an arm reaching out of the window of a car and grabbing a purse from a woman’s bag. Text in the bottom right of the image stated “UBER-CAM -1”.

The LTDA did not respond to the inquiries of the Advertising Standards Authority (ASA).

An ASA spokesman said: “We noted that LTDA referred to Uber as unsafe for passengers and road users, and questioned whether passengers should trust Uber with their data.

“We considered the picture, in the context of the ad, was intended to portray an Uber driver stealing a woman’s purse.

“In any case the image, as well as the text in the Facebook post, created the impression that Uber drivers were untrustworthy and took part in illegal behaviour.

“We therefore concluded that the ad denigrated Uber and was therefore in breach of the Code.

“The ad must not appear again in its current form. We told the LTDA not to denigrate Uber.”

He added: “We were concerned by LTDA’s lack of response and apparent disregard for the Code.

“We reminded them of their responsibility to provide a response to our enquiries and told them to do so in future.”