"This is the enjoyable moment of victory,” Taliban spokesman Zabihullah Mujahid said in a livestream. 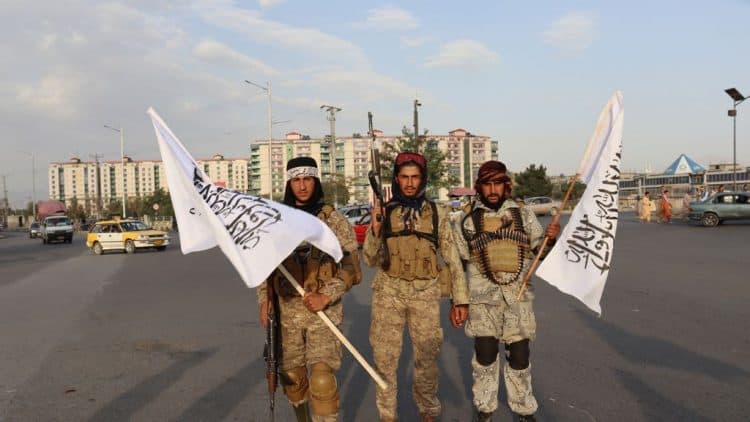 The Taliban’s leaders have symbolically marked their victory in Afghanistan by walking across Kabul international airport’s runway following the withdrawal of US forces.

“The world should have learned its lesson and this is the enjoyable moment of victory,” Taliban spokesman Zabihullah Mujahid said in a livestream posted by a militant.

Later speaking to Al-Jazeera Arabic on the airport’s runway, Mr Mujahid rejected having a caretaker government and insisted that Kabul remained safe.

“There will be security in Kabul and people should not be concerned,” he said.

Earlier, US Secretary of State Antony Blinken said “under 200, likely closer to 100” Americans wishing to leave remain in Afghanistan.

Mr Blinken said the US will continue to try to get Americans and Afghans out of the country, and will work with Afghanistan’s neighbours to secure their departure either over land or by charter flight once the Kabul airport reopens.

Taliban fighters draped their white flags over barriers at the airport as others guarded the civilian side of the airfield.

Inside the terminal, several dozen suitcases and pieces of luggage were left strewn across the floor, apparently left behind in the chaos. A poster of Ahmad Shah Massoud, the famed anti-Taliban fighter, had been destroyed.

The airport had seen chaotic and deadly scenes since the Taliban blitzed across Afghanistan and took Kabul on August 15.

Thousands of Afghans besieged the airport, some falling to their death after desperately hanging onto the side of an American C-17 military cargo jet.

Last week, an Islamic State suicide attack at an airport gate killed at least 169 Afghans and 13 US service members.

But on Tuesday, after a night that saw the Taliban fire triumphantly into the air, guards now blearily on duty kept out the curious and those still somehow hoping to catch a flight out.

“They have left and now our country is free”

“After 20 years we have defeated the Americans,” said Mohammad Islam, a Taliban guard at the airport from Logar province, cradling a Kalashnikov rifle.

“They have left and now our country is free.”

“It’s clear what we want. We want Shariah (Islamic law), peace and stability,” he added.

Mohammad Naeem, a spokesman for the Taliban’s political office in Qatar, similarly praised the takeover in an online video early on Tuesday.

“Thank God all the occupiers have left our country completely,” he said, congratulating fighters by referring to them as mujahedeen, or holy warriors.

“This victory was given to us by God. It was due to 20 years of sacrifice by the mujahedeen and its leaders. Many mujahedeen sacrificed their lives.”

Zalmay Khalilzad, the US special representative who oversaw America’s talks with the Taliban, wrote on Twitter that “Afghans face a moment of decision & opportunity” after the withdrawal.

“Their country’s future is in their hands. They will choose their path in full sovereignty,” he wrote.

“This is the chance to bring their war to an end as well.”