Women across Switzerland held a strike on Friday to highlight their wealthy nation’s poor record on female rights, recreating the passion of the first such walkout 28 years ago. In Lausanne, chanting protesters gathered at midnight outside the cathedral tower, whose bell was illuminated in purple, the official colour of the protest. Blowing whistles and […] 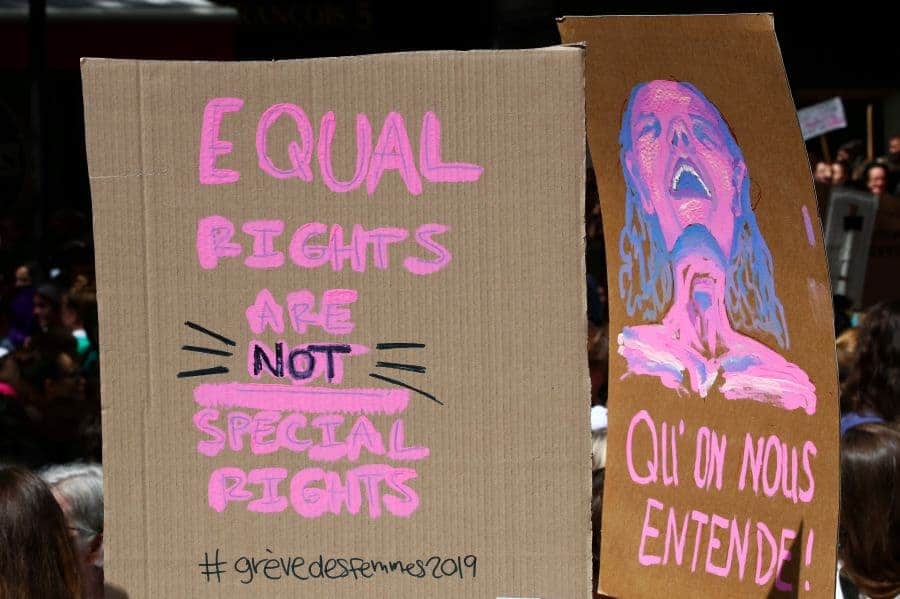 Women across Switzerland held a strike on Friday to highlight their wealthy nation’s poor record on female rights, recreating the passion of the first such walkout 28 years ago.

In Lausanne, chanting protesters gathered at midnight outside the cathedral tower, whose bell was illuminated in purple, the official colour of the protest.

Blowing whistles and banging pots and pans, hundreds of demonstrators – mostly women but also men – carried placards reading “no means no”, “I am not a princess but the woman I choose to be”, and “don’t free me, I’ll do that myself”.

Protesters marched through the streets of Zurich, the Swiss financial capital. “Men, go do the ironing,” one sign read.

Despite its high quality of life, Switzerland lags other developed economies in female pay and workplace gender equality.

Friday’s event echoed a strike in 1991, five years before the Gender Equality Act came into force. That banned workplace discrimination and sexual harassment and protected women from bias or dismissal over pregnancy, marital status, or gender.

But more than 20 years later, women still earn less than men, face routine questioning of their competence, and encounter condescension and paternalism on the job, they say.

Organisers say the strike draws attention to wages, recognition of care work, violence against women, and the need for greater representation in positions of power and more equitable family policy.

Swiss women earn roughly 20% less than men. While that is an improvement from about a third less in 1991, the discrimination gap — meaning differences that cannot be explained by rank or role — has actually worsened since 2000, government data show.

On June 14, 1991, women blocked trams during a sit-in in the heart of Zurich’s financial district and gathered outside schools, hospitals and across cities with purple balloons and banners to demand equal pay for equal work.

That came a decade after basic gender equality was enshrined in the Swiss constitution and less than three months after women for the first time were allowed to participate in a regional vote in the canton of Appenzell Innerrhoden.

“We have realised that even after this first strike in 1991, things didn’t really change. Equality is enshrined in the Constitution, but real, material, effective equality doesn’t exist for all women,” said organiser Tamara Knezevic, 24.

“We have so many demands and so many reasons to create this large, popular protest front of women because all these laws, all that we have obtained, we haven’t really obtained it for good.”

An annual study by the World Economic Forum has found global progress on gender equality stagnating. Switzerland ranked 34th for economic participation and opportunity and 44th for wage equality in the 2018 study of 149 countries.

Christine Croset, a teacher trainer, complained that too many jobs traditionally assigned to women are not rewarded properly, while a glass ceiling capped their advancement.

“Nothing is fine, and we have been waiting for too long now,” she said.