A graph of the pound against the US dollar has been made to look like the White Cliffs of Dover after Theresa May failed to hit the mark in Florence. Sterling took a dive immediately after the speech which gave few answers as to the direction of Brexit talks and raised yet more questions and […] 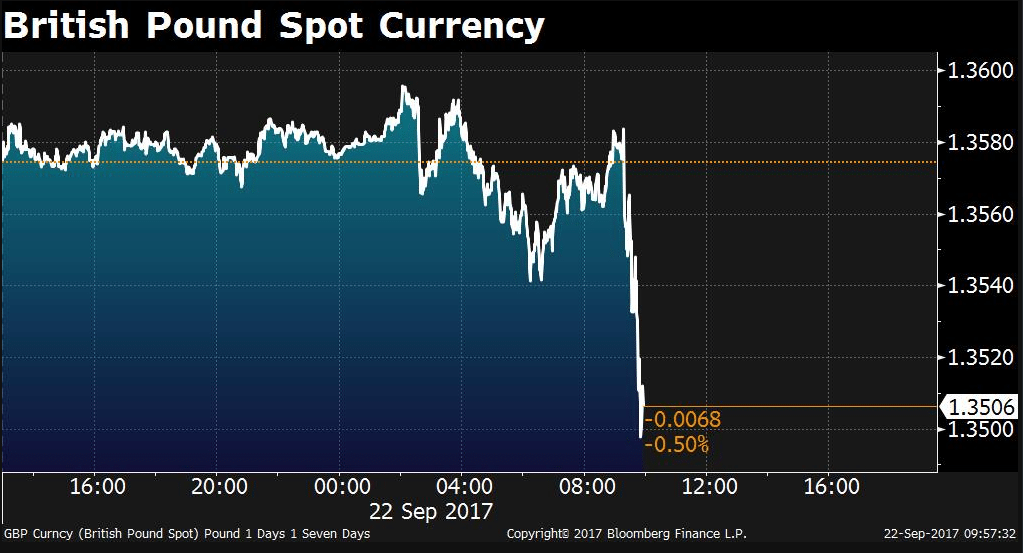 A graph of the pound against the US dollar has been made to look like the White Cliffs of Dover after Theresa May failed to hit the mark in Florence.

Sterling took a dive immediately after the speech which gave few answers as to the direction of Brexit talks and raised yet more questions and uncertainty.

“The main takeaway for markets is a more formally expressed desire to pursue a transitional arrangement of ‘around two years’, from when the time limit following the triggering of Article 50 expires, presumably beginning from March 2019.

“For the near-term, negotiations may likely be hampered by the lack of detail offered on the main items for discussion, namely the Irish border question, the ultimate financial settlement with the EU and the rights of EU citizens. European Commission Chief Negotiator Michel Barnier was not given much new to work with on these points.

“While the pound weakened and UK rates fell during the speech, these moves were quite muted, perhaps an appropriate reaction to a speech carrying very little new information.”

Social media reacted with muted praise for the Prime Minister.

One commentator noted how May has managed to achieve the almost unachievable in her #FlorenceSpeech – by p*ssing off both Remainers and Brexiters.

The PM had a couple of fans among those who had attended her speech:

But the European Commission officials Theresa May was there to address snubbed the Prime Minister by not attending.

And the main reaction to her speech was to wonder why the UK is still so unprepared and unclear about the consequences of Brexit.