The inscription on both reads: ‘A race set free and the country at peace. Lincoln rests from his labors.’ 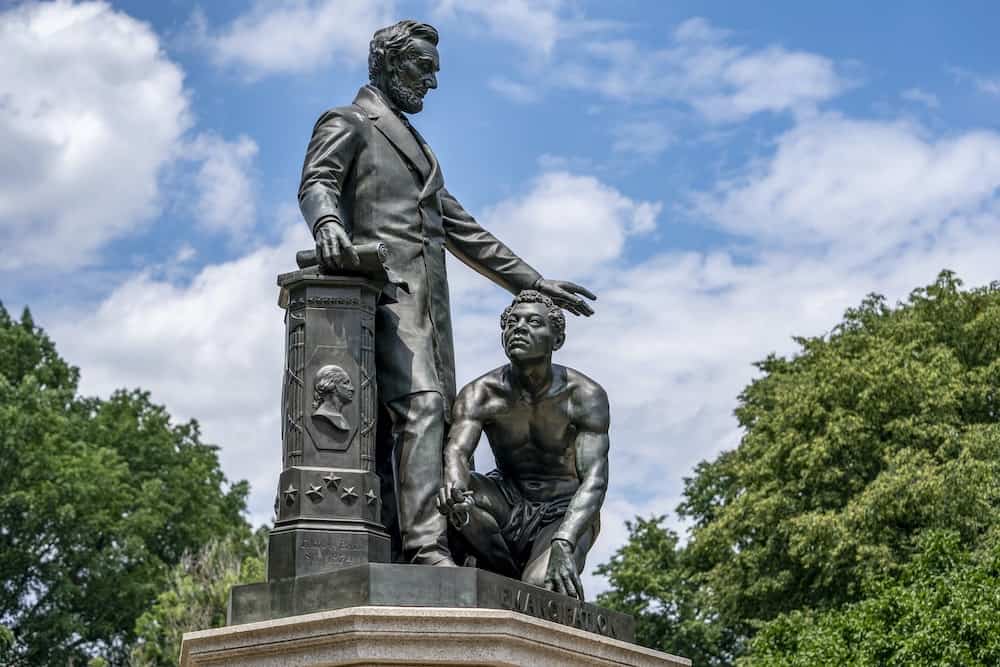 Campaigners are calling for the removal of twin Emancipation memorials in Washington DC and Boston that depict a freed slave kneeling at Abraham Lincoln’s feet.

Protesters gathered earlier this week to demand the removal of the original in Washington, where the Army activated about 400 unarmed National Guard personnel ahead of calls circulating on social media to tear it down on Thursday evening.

And in Boston, where a petition is circulating for the copy to be taken down, the city’s arts commission is holding public hearings on Thursday and next Tuesday to discuss its fate.

Critics said the statues, originally intended in 1876 to celebrate liberation, look more like subservience and supremacy in 2020.

“I’ve been watching this man on his knees since I was a kid,” said Tory Bullock, a black actor and activist leading the campaign to get the Boston memorial removed.

“It’s supposed to represent freedom but instead represents us still beneath someone else. I would always ask myself, ‘If he’s free, why is he still on his knees?’” he said.

The memorial has been on Boston’s radar at least since 2018, when it launched a comprehensive review of whether public sculptures, monuments and other artworks reflected the city’s diversity and did not offend certain communities.

The Boston Art Commission said it was paying extra attention to works with “problematic histories”.

Black donors paid for the original in Washington, while white politician and circus showman Moses Kimball financed the copy near Boston Common.

The inscription on both reads: “A race set free and the country at peace. Lincoln rests from his labors.”

Lilian McCarthy, one of the more than 12,000 people who signed Bullock’s petition, said: “How can you say you care about black lives and then leave a statue up for decades that actually promotes a disgusting and demeaning image of those very lives?”

US president Donald Trump told Fox News’ Sean Hannity on Thursday he could see “controversy but I can also see beauty” in the Emancipation Memorial in Washington.

He suggested that activists who want to see certain memorials removed should petition government.

He said: “You know, we can take things down, too.

“I can understand certain things being taken down. But they ought to go through a process, legally. And then we take it down, in some cases put ’em in museums or wherever they may go.”

But Eleanor Holmes Norton, Washington DC’s non-voting delegate in the US House, said the monument ignores the fact that black Americans played a pivotal role in securing their own freedom.

“Blacks too fought to end enslavement,” she tweeted this week, saying she was introducing a bill to move the statue to a museum.