Refusing to nationalise energy firms is a major departure from the leadership of Labour under Jeremy Corbyn. 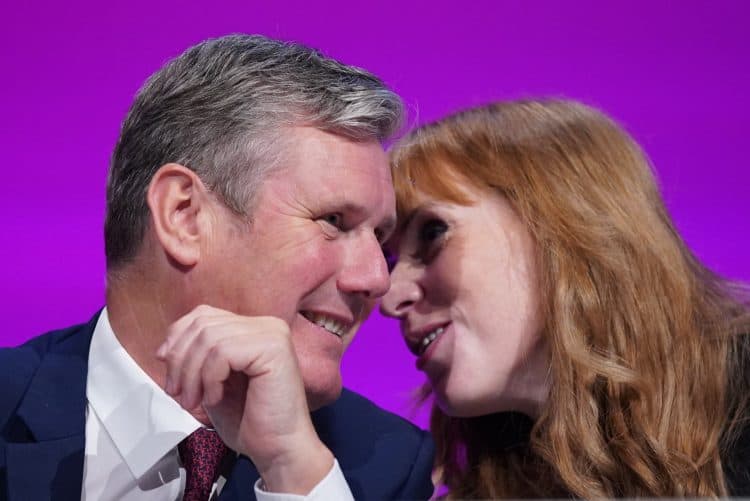 Sir Keir Starmer has ruled out nationalising the UK’s largest energy firms in a major departure from the leadership of Labour under Jeremy Corbyn. He also distanced himself from Angela Rayner’s comments about the Conservative Party.

But the current party leader did not exclude the possibility of another form of “common ownership” of the Big Six companies if he became prime minister, as a crisis of spiralling bills looms.

In an interview during the Labour Party conference in Brighton, Sir Keir also did not rule out raising income tax if he formed a government as he set out his principles for fairer taxation.

And he set out plans to end the charitable status of England’s private schools to raise £1.7 billion and plough funding into state schools.

Sir Keir has set the party on a course back towards centre ground after succeeding Mr Corbyn following the disastrous general election defeat to Boris Johnson.

A key ambition under his predecessor was a massive programme of renationalisation, but Sir Keir has rejected this despite a pledge when he ran for the leadership last year.

Asked if he would nationalise the Big Six energy companies, Sir Keir told The Andrew Marr Show on BBC One: “No.”

He was shown one of his 10 campaign pledges stating that “public services should be in public hands” and that he would “support common ownership of rail, mail, energy and water”.

“I don’t see nationalisation there,” Sir Keir told Marr. “When it comes to common ownership I’m pragmatic about this. I do not agree with the argument that says we must be ideological.”

But he did not say what form common ownership would take if it was not nationalisation, and neither did did aides.

“I’d be pragmatic about it, and where common ownership is value for money for the taxpayer and delivers better services, then there should be common ownership,” Sir Keir added, giving the example of track and trace.

“We are looking at tax, nothing is off the table, but we don’t know what the state of the national finances will be as we go to the election,” he told Marr.

“What we don’t want to do – whether it’s income tax, or any other sort of tax, National Insurance – is unfairly to hit working families, which is what this Government is doing.”

Sir Keir hinted at a wealth tax to rebalance the fairness of the taxation system.

“Look at the choice the Government is making, under their provision, under their tax they announced the other week, those with many properties as landlords don’t pay a penny more, their working tenants do,” he added.

Citing the gap between children of wealthy and poor families being further exposed by the coronavirus pandemic, Sir Keir set out a plan to increase the tax burden of private schools.

A Labour government would end the charitable status of England’s private schools, raising an estimated £1.6 billion from VAT and £100 million from business rates.

He was trying to shift the focus on to future policies amid a bruising row with the party’s left over his plans to reform rules for electing future party leaders.

Labour set out plans to overhaul the curriculum in English schools with a focus on digital skills, practical work and life skills, and sport and the arts to ensure pupils are “equipped for life”.

The citizenship programme in the curriculum would be changed to include pension planning, understanding credit scores and applying for a mortgage.

Every child would have access to a device at home through a fund available to local authorities to replace laptops and tablets given out during the pandemic.

Deputy Labour leader Angela Rayner refused to apologise for describing senior Tories as “scum” as Sir Keir Starmer distanced himself from her comments.

Ms Rayner’s attack, delivered at a reception for activists at the Labour Party conference, has outraged members of the Government, with one minister accusing her of “talking crap”.

But Ms Rayner said she would only apologise if Boris Johnson said sorry for past comments he made “that are homophobic, that are racist, that are misogynistic”.

Labour leader Sir Keir said he would speak to his deputy but it was a matter for her whether she apologised.

Angela and I take different approaches and that’s not language that I would use,” he told BBC One’s The Andrew Marr Show.

Ms Rayner said her comments, made in a “post-watershed” reception, were an attempt to get across the “anger and frustration” felt about Mr Johnson and the Cabinet.

“Anyone who leaves children hungry during a pandemic and can give billions of pounds to their mates on WhatsApp, I think that was pretty scummy,” she told Sky News.

The Ashton-under-Lyne MP said her attack was made in the “street language” of her northern working class roots.