They say elephants never forget, but crafty squirrels can remember how they got into a garden birdfeeder… two years later. And they are also able to use those skills to solve a redesigned version of the same test within half a minute. The intelligence of the pesky rodents is well known, but the new findings […] 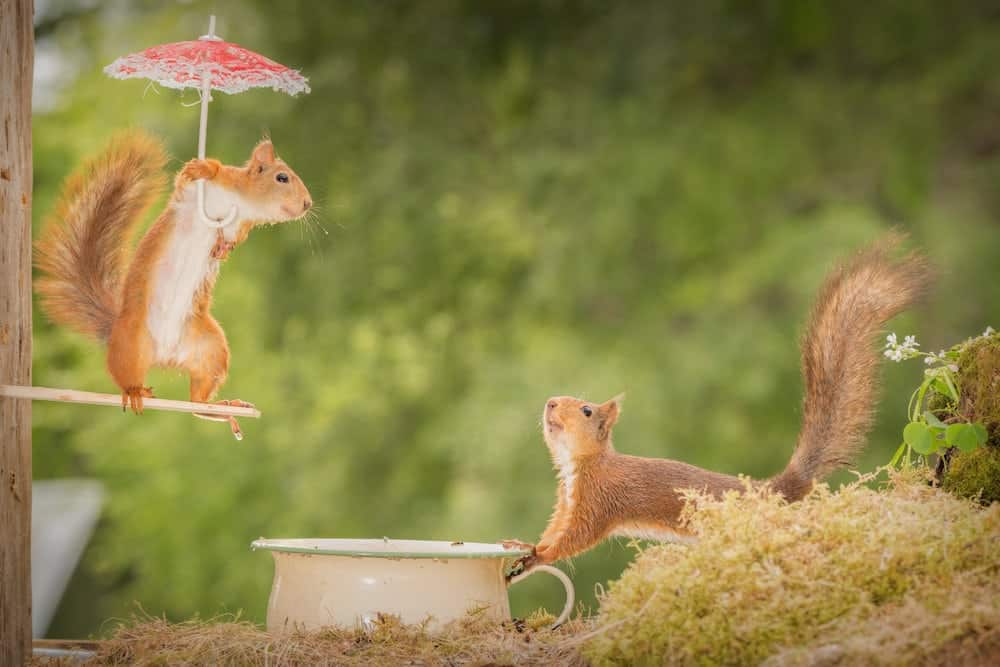 They say elephants never forget, but crafty squirrels can remember how they got into a garden birdfeeder… two years later.

And they are also able to use those skills to solve a redesigned version of the same test within half a minute.

The intelligence of the pesky rodents is well known, but the new findings shed fresh light on just why they are such a nuisance.

Despite their amusing antics, keeping neighbourhood grey squirrels out of a birdfeeder is usually a losing battle.

It regularly has people wishing to attract birds pulling their hair out at whether there is anything they can do to stop them.

The sneaky animals will gobble up almost any type of seed – and go to almost any lengths to get it.

This remarkable capacity to adapt has played a major role in their spread from North America to the UK and other parts of the world.

Dr Pizza Ka Yee Chow, of the University of Exeter’s Centre for Research in Animal Behaviour, said: “This might be why grey squirrels can survive very well in towns and cities.

“For example, they’re very good at getting food from bird feeders.

“People may try different types of bird feeders to keep the squirrels away, but this research shows grey squirrels can not only remember tricks for getting food, but can apply those skills in new situations.”

In the study, five squirrels were given a task identical to one they had tried 22 months earlier, in which they had to press levers to receive hazelnuts.

In that first experience, the squirrels improved with practice, taking an average of eight seconds on their first attempt and just two seconds by their final effort.

Trying again for the first time in 22 months, they took an average of just three seconds to get a hazelnut.

Grey squirrels are known to have good long-term memory – they are ‘scatter-hoarders’, collecting and hiding thousands of nuts every autumn.

Co author Professor Stephen Lea said: “Previous research at Exeter has shown that their memory for the locations of hidden nuts is excellent.”

But another of the researchers, Dr Theo Robert, said the new research demonstrates a “very different form of memory.”

He said: “This is not just remembering where things have been left, it shows they can recall techniques which they have not used for a long time.

“It is also different from what we see in the wild because they are remembering things for longer than the few months of memory needed to find hidden food.”

When presented with a version of the test that looked different but required the same technique, the squirrels showed a response known as “neophobia” – a fear of news thing.

They hesitated for more than 20 seconds on average before starting the task, the team report in the journal Animal Cognition.

But once they began, it took just a couple of seconds for them to get a hazelnut, showing they were able to recall and apply the technique they learned in the previous form of the challenge.

It shows their reputation as being among the ten smartest animals on the planet is well merited.

They are known to put on elaborate bogus food burying displays to deceive onlookers.

The fake burials are to trick potential thieves, such as other squirrels or birds, into thinking that they have stored their food stock there.

When they actually bury a nut, planning ahead for when food is scarce in winter, they immediately know exactly where they hid it – months later.

And squirrels in California will cover their fur in the scent of rattlesnakes – to mask their own scent from predators.

In captivity, grey squirrels can live up to 20 years. Some still survive up to 10 years in the wild, although most only manage three to four because of predation and loss of habitat