In this shocking clip filmed in West London a Brazilian couple and their friend are berated by a dog walker for speaking their native Portuguese language in the street. The woman walking a Yorkshire terrier bellowed: “Speak English when you’re walking on this street.” One of the women filmed the incident, shocked that they were […] 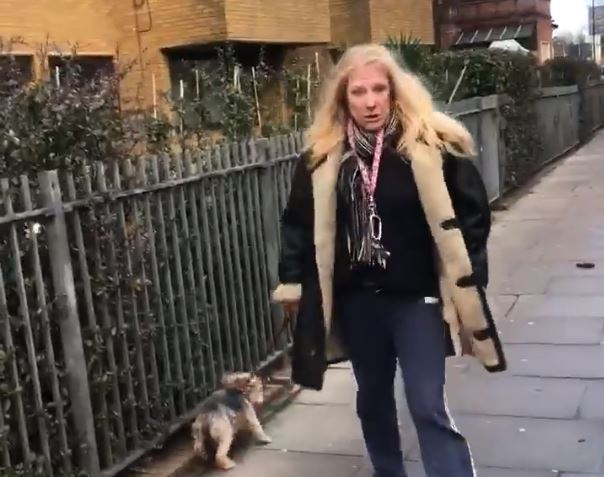 In this shocking clip filmed in West London a Brazilian couple and their friend are berated by a dog walker for speaking their native Portuguese language in the street.

The woman walking a Yorkshire terrier bellowed: “Speak English when you’re walking on this street.”

One of the women filmed the incident, shocked that they were being viciously berated for speaking their own language.

At one point the dog walker, wearing a Union Jack lanyard bellowed “I’m a vulnerable woman and you walk behind me speaking in your native language. You’re in London. When I’m in Brazil I speak Brazilian.”

She continued to berate the tourists shouting: “And you f*****g walk behind me, talking in a foreign language,and he’s right behind me. I’m a single woman. Shut up!”

Natália Rossini who filmed the incidentand posted it on Facebook where it has gone viral, said that she had reported the incident to the police.

The Met confirmed that a report of a “racially aggravated assault” on Saturday evening in the Ladbroke Grove area had been made, but no arrests.

Natália Rossini said that she, her husband and a friend had not talked to the woman when she turned round and started screaming at them.

She said the tirade began because they were speaking their native Portuguese: “Native Brazilians speaking our language, she came screaming that it was for us to stop speaking our native language while in her country,”

She added: “all because we spoke Portuguese among friends. This never happened to us, we never thought… London was a capital where they speak practically all the languages of the world, I was in a state of shock, I could barely speak.”

In her post she thanked everyone for their kind words and added:  “we know that this is a exception and not everyone is like that.”