The source of the itch sensation has been discovered by scientists

The source of the itch sensation has been discovered by scientists. A study conducted by Chinese researchers has discovered a central neural circuit that is “critical” for transmitting the itch signal. Linked with the desire to scratch, the itch sensation is an important protective mechanism for animals. But chronic itch, often seen in patients with […] 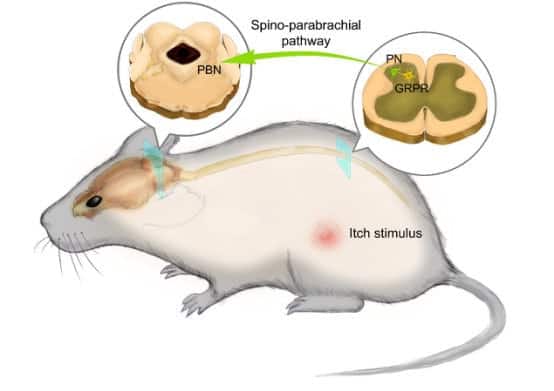 The source of the itch sensation has been discovered by scientists.

A study conducted by Chinese researchers has discovered a central neural circuit that is “critical” for transmitting the itch signal.

Linked with the desire to scratch, the itch sensation is an important protective mechanism for animals.

However, therapeutic approaches for chronic itch treatment have developed slowly due to the lack of knowledge about what causes the itch sensation.

Recent progress has strengthened the understanding of the molecular and cellular mechanisms underlying itch signal processing at the spinal level.

But how itch information is transmitted to the brain was mostly unknown.

Now a study conducted by Doctor Sun Yangang’s lab at the Institute of Neuroscience of the Chinese Academy of Sciences has made a “critical” breakthrough in discovering how the itch signal is transmitted to the brain.

Using state of the art technology, the researchers showed that the spino-parabrachial pathway plays a key role in transmitting itch signals from the spinal cord to the brain.

They also identified the parabrachial nucleus (PBN) as a first central relay for the itch sensation.

The researchers first investigated how the spinal itch-specific neurons send itch signals to the brain.

The researchers found that the spinal GRPR neurons did not send the itch signal directly to the brain.

Since the PBN is activated during itch processing, they postulated that the spinal GRPR neurons might be connected to the PBN poly-synaptically, and so send itch information to the PBN indirectly.

Dr Yangang said: “Light-induced activation of the spinal GRPR neurons evoked excitatory postsynaptic responses in the spinal neurons that project to the PBN.”

He said this result showed that spinal GRPR neurons activate the PBN via connection to the projection neurons, supporting their idea.

The findings, published in the journal Science, also revealed a long-range neural circuit that is critical for transmitting itch signals from the spinal cord to the brain.

The discovery suggest that the PBN represents a first critical central relay for the itch sensation.

Dr Yangang said they have further shown that the PBN plays an “important role” in regulating scratching behavioir in both acute and chronic itching.

He added: “This study paves the way for further dissection of central circuit mechanisms underlying itch signal processing, and provides a potential target for therapeutic treatment of chronic itching.”