Snakes lose their stripes the nearer they live to man – because of pollution, suggests a new study. Researchers monitoring turtle-headed seasnakes living on coral reefs in the Pacific noticed something unusual about the snakes’ colour patterns. Seasnakes living in more pristine parts of the reef were decorated with black-and-white bands or blotches. But those […] 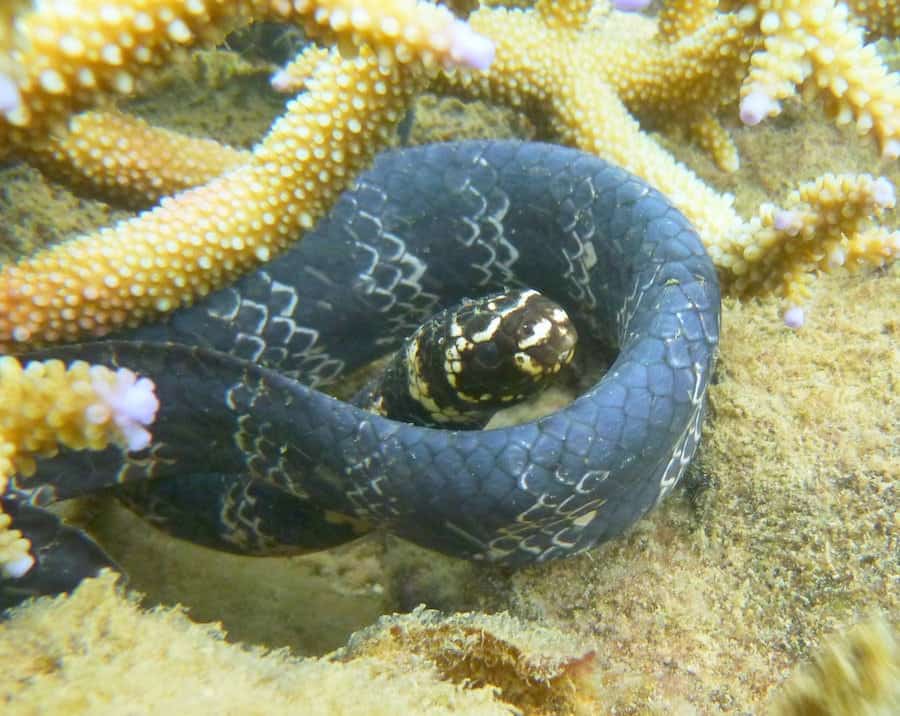 Snakes lose their stripes the nearer they live to man – because of pollution, suggests a new study.

Researchers monitoring turtle-headed seasnakes living on coral reefs in the Pacific noticed something unusual about the snakes’ colour patterns.

Seasnakes living in more pristine parts of the reef were decorated with black-and-white bands or blotches.

But those in places with more human activity – near the city or military activity – were black.

The colour differences are explained by differences in the snakes’ exposure to pollution, according to the findings published in the journal Current Biology.

Researchers say the blacker skin of urban seasnakes allows them to more effectively bind and rid their bodies of contaminants, including arsenic and zinc, each time they shed their skins.

The findings add seasnakes to a growing list of species that show industrial melanism, a greater prevalence of dark-colored varieties in industrial areas.

Professor Rick Shine, of the University of Sydney in Australia, said: “The animals I study continue to astonish me.

“I think it’s remarkable to find industrial melanism in organisms as different as moths and seasnakes.”

Study lead author Doctor Claire Goiran, of Labex Corail and Universite de la Nouvelle-Calédonie, got the idea that blacker skin might be related to pollutant exposure after learning that the darker feathers of urban pigeons in Paris store more zinc than lighter feathers.

Dr Goiran and her colleagues wondered whether a similar thing might be happening in the seasnakes.

To find out, the researchers measured trace elements in the sloughed skins of seasnakes from urban-industrial compared to other areas and in dark versus light skin.

As a result, it appears that seasnakes whose skin is more heavily pigmented with melanin have an advantage over their lighter relatives in polluted areas.

Prof Shine said that the findings are another example of rapid adaptive evolutionary change in action.

But for him, it’s also a more sinister reminder.

He added: “Even on an apparently pristine coral reef, human activities can pose very real problems for the animals that live there.”