Billions of years old, it was discovered encased inside a meteorite that fell to Earth in Antarctica 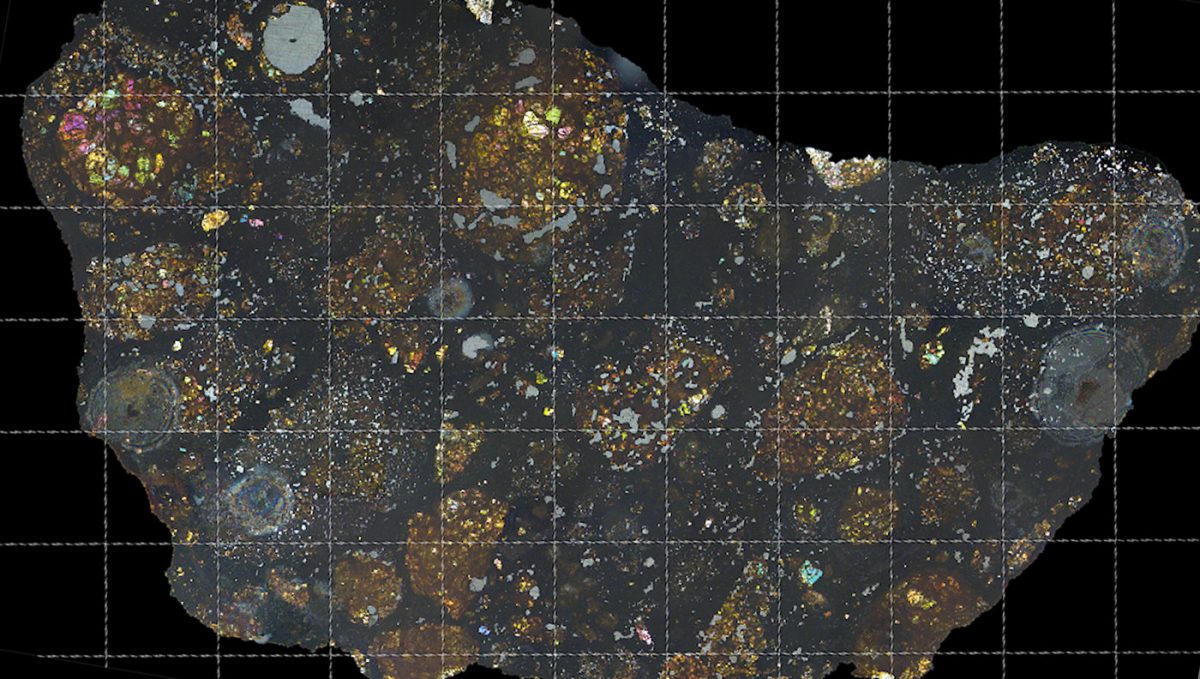 A sliver of space rock as thin as a human hair may hold the key to the formation of the Solar System, suggests a new study.

Billions of years old, it was discovered encased inside a meteorite that fell to Earth in Antarctica.

Astronomers have likened it to the capture of prehistoric insects in amber. Despite crashing onto an icefield, it was in remarkably pristine shape with little weathering.

This enabled scientists to carry out a detailed chemical analysis. Inside, the international team found the carbon-rich slice of primitive material.

At just a tenth of a millimetre across, it bore striking similarities to extraterrestrial dust particles.

These are believed to have originated in comets that formed near the outer edges of the Solar System’s.

About three to 3.5 million years after the birth of the Sun and planets, it was picked up by the growing asteroid – from which the meteorite originated.

This was long before Earth had even finished growing, the international team report in Nature Astronomy.

It provides a vital missing link in the search to understand how we went from the initial clumps of dust and ice to the planets they would eventually become today.

The solar system formed about 4.5 billion years ago but scientists still don’t know how.

Named LaPaz after the ice field where it landed, the meteorite sheds light on the formation and evolution of the Earth, Sun and Moon.

Prof Larry Nittler said: “Because this sample of cometary building block material was swallowed by an asteroid and preserved inside this meteorite, it was protected from the ravages of entering Earth’s atmosphere.”

Meteorites were once part of larger bodies – asteroids, which broke up due to collisions in space and survived the trip through the Earth’s atmosphere.

Asteroids and comets both formed from the disk of gas and dust that once rotated around the young Sun.

But they clumped together at different distances from the star, affecting their chemical makeup.

By studying a meteorite’s chemistry and mineralogy, researchers can reveal details about its formation.

They can also tell how much heating and other chemical processing it experienced during the Solar System’s formative years.

LaPaz belongs to a particularly primitive class of meteorites called carbonaceous chondrites are thought to have formed beyond Jupiter.

Sophisticated chemical analysis suggested the entombed material originated in the icy outer Solar System along with objects from the Kuiper Belt – the most famous of which is Pluto. This is where many comets originate.

Prof Nittler, of The Carnegie Institution for Science in Washington DC, said: “It gave us a peek at material that would not have survived to reach our planet’s surface on its own – helping us to understand the early Solar System’s chemistry.”

The primitive material’s existence inside the meteorite indicates such particles migrated from the outer edges to the closer-in area beyond Jupiter where the carbonaceous chondrites formed.

This was due to drag from the surrounding gas – revealing details about how our Solar System’s architecture was shaped during the early stages of planet formation.

Prof Nittler said it supports the idea of a “radially inward transport of materials” from the outer proto-planetary disk into a carbon reservoir.

This was during the birth of the rock fragments that ended up developing into Mars, Jupiter, Mercury, Neptune, Venus, Uranus, Saturn – and Earth.