Mark Boon, Operations Director at Govia, even handed out his business card to shocked passengers who were forced to stand 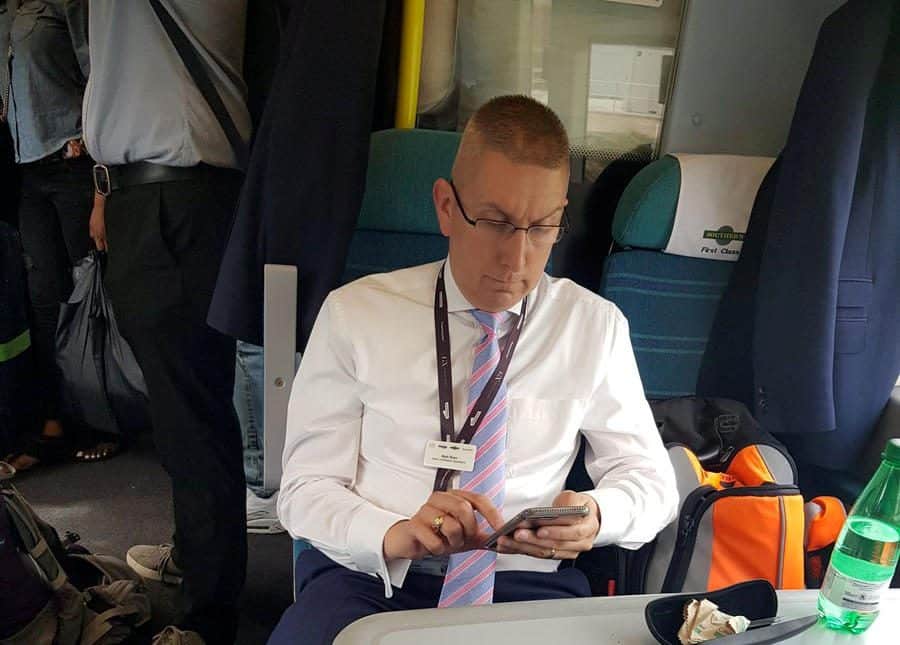 A commuter claims this picture shows a Southern Rail boss taking up TWO seats in first class on a packed train – after preventing economy passengers from entering the carriage.

He then spread out in comfort – placing his bag on the empty seat beside him – while customers had to squeeze into the rammed doorway and adjoining carriage.

The image has sparked outrage on social media among Southern Rail passengers who have endured months of delays amid strikes by staff.

Passengers on Govia’s Thameslink and Great Northern trains have endured over a month of disruption following the introduction of new timetables in May.

According to the BBC, the company have been threatened with losing its Thameslink franchises unless performance on its services in the South East of England rapidly improves.

Govia have said that it is working on plans to compensate passengers.

“The industry is working together on this and an announcement will be made in due course,” said a spokesman for Govia Thameslink Railway (GTR).

Hair stylist Emma, from Croydon, South London, claims Mr Boon was even handing his business card out to passengers as he turned them away.

Sharing the photo on Twitter, Emma wrote: “Totally shocked to see #GoviaRailway Head of Operations, Mark Boon, telling all commuters to stay out of an EMPTY First Class carriage on a LATE & very packed train this morning.

“Meanwhile he took up two seats IN there.”

She continued: “It was a London bound Southern Train that arrived into London Victoria at approx 11.45am this morning.

“I still can’t believe it. He even handed his business card out to the people that he was turning away! Talk about rubbing salt into commuters wounds.”

Emma said that she joined the train mid-route before it terminated at London Victoria. She described the other passengers as a “nice, quiet bunch of people”.

He was crowned ‘Customer Service Manager of the Year’ while working for South West Trains in 2015.

And within 24 hours of sharing the photo, Emma’s Tweet had been shared 350 times – with plenty of outraged Twitter users sharing their disdain.

Richie Northcote wrote: “Disgusting. There’s going to be some kind of commuter/passenger revolt soon, I can feel it bubbling.

“The disgraceful service us regular commuters have to deal with would simply not be tolerated in any other country – and this guy is just rubbing salt in sore wounds.”

And Twitter account GoblinUsers, of Barking and Gospel Oak Rail Users’ Group, said: “Having had dealings with him in a past life when he was a station manager around 2003, I am shocked and amazed to see him in such a senior position.

“It certainly helps explain why GTR is such a useless outfit. I do feel sorry for the staff who work for him.” 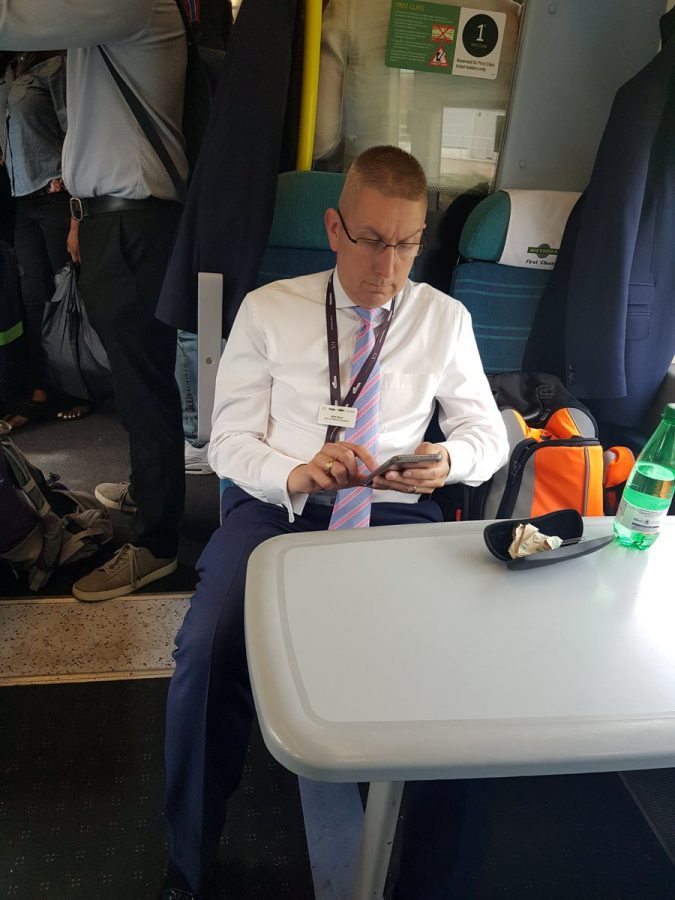 Paul Coles wrote: “Who is he to refuse people to sit down in first class? I doubt he has the authority.”

Another user, Kay, added: “He has no authority. He isn’t a revenue collector or guard. Therefore he can’t tell anybody what to do.”

And freight train driver Stringfellow Hawke, from South Wales, added: “He’s not an “authorised agent of the railway” under the conditions of carriage.