“If Boris Johnson and his cohorts were serious about decarbonisation, they would be making it easy for people to get out of their cars and onto our railways." 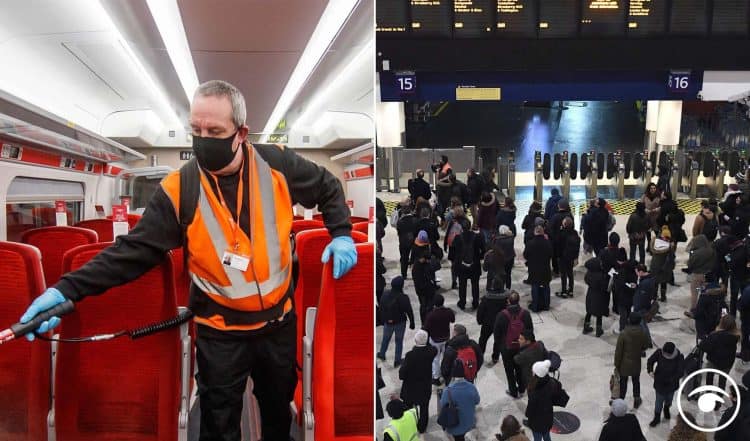 A voluntary severance scheme has been launched in the rail industry under post-pandemic reforms which unions warn will lead to huge job losses.

The Rail Delivery Group said the move was “vital” to create a more modern, reliable and “passenger-focussed” railway in response to changing travel patterns.

The biggest rail workers union said it would “wreck” industrial relations and warned of a “collision course” with employers.

Train operators employ about 65,000 workers, but no figure has been put on the number expected to leave, or how much money will be spent on the scheme, which will run for the next three weeks.

Eligible employees will be able to get a calculation of the support available to them and then express an interest.

The scheme excludes Southeastern, which is being taken back under Government control from October 17.

The scheme will be open to employees in specific areas as described by their employer, and is unlikely to have a big impact on driving grades, where there there is a shortage of workers.

The RDG said as part of the reforms there will be opportunities for employees to move to more rewarding roles in the industry, supported by re-training and re-skilling programmes.

Hundreds of millions of pounds a month of taxpayer support is being provided to the rail industry, and journeys are not expected to fully recover to 2019 levels for some time, said the RDG.

Revenue and journeys are currently around 65% of pre-pandemic levels.

RDG chairman, Steve Montgomery, said: “The railway can grow and become more customer focussed, with new opportunities for hundreds of thousands of people working on it, but to do that we must adapt, and we cannot take more than our fair share from the taxpayer.

“Working with trade unions and our employees, our aim is to secure even more rewarding long-term careers for those that want them and offer support for those who would like to leave, reshaping the railway to deliver a strong, green recovery across all parts of the country as we rebuild.”

Mick Lynch, general secretary of the Rail, Maritime and Transport union (RMT) said: “This proposed job loss scheme across the rail industry has not been agreed with the RMT and we would call for it to be withdrawn ‎before serious damage is done to industrial relations at this critical point as we emerge from the pandemic.

“We are angry that these proposals have been bounced on us outside of the discussions we have been engaged in through the Rail Industry Recovery Group‎. That is a serious breach of trust.

“RMT’s executive will consider our response but we have said from the off that we will not allow the pandemic to be used as a cloak for a jobs massacre across the rail industry.

“These plans should be withdrawn to allow normal industrial relations and procedures to continue without this threat hanging over us.”

The union warned the move would wreck industrial relations and put it on a collision course with employers.

Manuel Cortes, leader of the Transport Salaried Staffs Association, said: “It’s ludicrous that with Cop26 just round the corner, the Conservatives are looking to cut thousands of rail jobs which will mean that services on our railways will not be returning to their pre-pandemic levels.

“If Boris Johnson and his cohorts were serious about decarbonisation, they would be making it easy for people to get out of their cars and onto our railways.

“You simply don’t do this by cutting train services whilst keeping in place the most expensive walk-on fares in the world, and you certainly shouldn’t be allowing private operators to make profits at the expense of taxpayers and passengers.”

Related: Reactions as #ToryCovidCatastrophe trends & PM is sunning himself in Marbella