Police say 14 men and three women, aged between 17 and 50, were arrested during a series of early morning raids targeting those suspected of being involved in international human trafficking 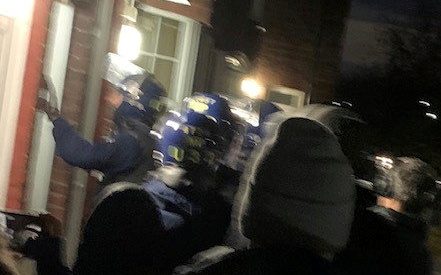 An international human trafficking gang was smashed and 29 women rescued in a series of coordinated early morning raids across London today.

An additional four warrants were executed simultaneously in Romania resulting in the arrest of one man in the city of Constanta.

Scotland Yard said the international operation led to the arrests of 17 people on suspicion of modern slavery and running a prostitution ring.

Officers stormed addresses in the boroughs of Redbridge, Havering, Barking and Dagenham, Newham, Brentwood and Tower Hamlets, early this morning.

A total of 29 potential victims of human trafficking, all women aged between 20 and 40, were taken to safety from the addresses raided.

Detective Chief Inspector Richard McDonagh, from the Met’s Modern Slavery and Kidnap Unit, said: “Today’s synchronised operational activity spanned 16 addresses in east London and four addresses in Romania with the aim of, in one fell swoop, dismantling an organised crime network and providing support to the victims.”

The UK suspects have been taken to a central London police station where they remain in custody.

They are also charged with Class A drugs offences and firearm offences relating to a stun gun found during the raids.

A number organisations supporting victims of modern slavery, including the Church of England and Refuge, were also involved.

DCI McDonagh added: “The Met recognises the seriousness of modern slavery and the devastation it brings to people’s lives.

“We have an investigative capability across Frontline Policing and have invested in specialist resources through our Central Specialist Crime – Vulnerability Investigations Team which tackles complex cases. This allows us to target offenders and support victims.”

The Romanian Ambassador in the UK, Dan Mihalache, praised the joint efforts of the Metropolitan Police and the Romanian Police in combating trans-border criminality.

He also stressed the Romanian authorities’ commitment in fighting trafficking in persons and in preserving a safe environment for all citizens, irrespective of their nationality.

The Romanian Police attaché in the UK said: “Today’s operation is another example of our excellent bilateral cooperation. The operation was organised simultaneously in both countries in perfect coordination.

“Romanian police officers working shoulder to shoulder with our British partners is a great achievement, a proof of our mutual permanent support and a great professional reward.

“The Romanian Police is committed to continue its efforts in combating all forms of criminality together with the Metropolitan Police.”