At least 41 Palestinians have been killed and 1,800 wounded by Israeli troops as Donald Trump’s daughter Ivanka cut the ribbon the new US embassy in Jerusalem. The Trump administration opened the embassy today formally breaking decades of established American policy and international practice in a move that US officials say will create greater regional […] 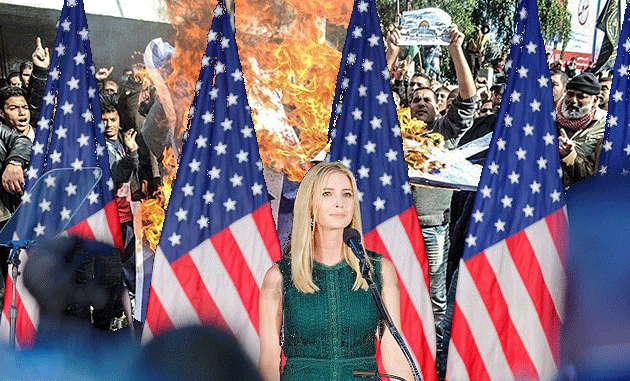 At least 41 Palestinians have been killed and 1,800 wounded by Israeli troops as Donald Trump’s daughter Ivanka cut the ribbon the new US embassy in Jerusalem.

The Trump administration opened the embassy today formally breaking decades of established American policy and international practice in a move that US officials say will create greater regional stability.

Critics say the decision to recognise Jerusalem as the Israeli capital could make a region already struggling with four ongoing conflicts all the more combustible.

They also argue it marks the end of the US role as an “honest broker” in Israeli-Palestinian negotiations.

As Ivanka unveiled the seal in today’s ceremony violent protests continued in Gaza, with dozens of Palestinians killed in clashes with Israeli forces.

Palestinians throughout the West Bank and Jerusalem have been urged to turn out en masse to protest the embassy move and take part in Tuesday’s 70th anniversary of the Nakba, or “catastrophe,” as Palestinians term Israel’s creation.

Over 15,000 people marched on the border with Gaza.

President Trump, via a videolink, told the guests that the opening of the US embassy had been a “long time coming”, adding: “Israel is a sovereign nation with the right to determine its own capital but for many years we failed to recognise the obvious.”

Bruce Riedel, a former CIA officer who now directs the Intelligence Project at the Brookings Institution, said that with tensions between Iran and Israel escalating in Syria, President Donald Trump is now “only a few days away from throwing another can of gasoline on the fire by moving the embassy to Jerusalem. It’s very dangerous.”

Ivanka Trump unveils the seal on the side of the US embassy in Jerusalem as violent protests continue in Gaza pic.twitter.com/xYgu1rz7Hz