Scottish scientists from the same institute that created "Dolly the Sheep" have created genetically modified pigs that are resistant to one of the world's deadliest animal diseases. 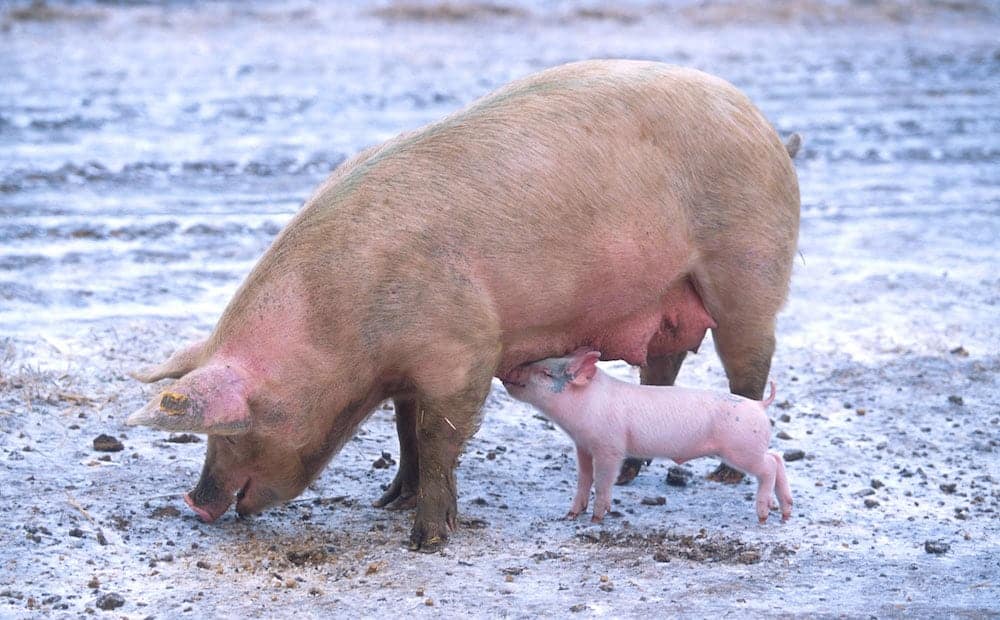 The great British banger could be produced from genetically modified pigs within a few years, according to new research.

Scottish scientists from the same institute that created “Dolly the Sheep” have created genetically modified pigs that are resistant to one of the world’s deadliest animal diseases.

It could lead to GM pork pies and sausages – despite fears over ‘Frankenstein food.’

What’s more the DNA change does not seem to have any effect on the pigs’ health.

Dr Christine Tait-Burkard said: “These results are exciting but it will still likely be several years before we’re eating bacon sandwiches from PRRS-resistant pigs.”

The devastating virus causes breathing problems and deaths in young animals. If pregnant sows become infected it can lead to them losing their litter.

It infects pigs using a gene on their cells’ surface called CD163.

Researchers at Edinburgh University’s Roslin Institute – which cloned ‘Dolly the Sheep’ – used a gene editing tool to snip a bit out.

Working with animal genetics giant Genus PLC they focused on the section of the receptor the virus attaches to in the eggs of female pigs – removing the doorway for the virus.

The researchers used a technique called CRISPR/Cas9, a carefully targeted enzyme which cuts strands of DNA. It is offering hope of new ways of combating a host of human illnesses.

Previous research had shown cells from these animals were resistant to the virus in lab tests.

It is the first time the pigs have been exposed to the virus.

The study published in the Journal of Virology found none became ill. Blood tests found no trace of the infection.

Vaccines have mostly failed to stop the spread of the virus – which continues to evolve rapidly.

Other groups have used gene editing to create PRRS-resistant pigs by removing the whole CD163 receptor.

Taking out only a section allows it to retain its ordinary function in the body and reduces the risk of side effects, said the researchers.

Dr Tait-Burkard said a broader public discussion on the acceptability of GM meat entering our food chain is now needed to help inform political leaders on how such techniques should be regulated.

She said: “We also need to carry out longer term studies to confirm these genetic changes do not have any unforeseen adverse effects on the animals.

“If these studies are successful and the public are accepting of this technology, we would then be looking to work with pig breeding companies to integrate these gene edits into commercial breeding stocks.”

Genetically engineered animals are banned from the food chain in Europe.

But it is not clear what regulations would apply to gene-edited animals as the approach is different.

GM techniques have been controversial because they can involve introducing genes of other species into an animal.

In contrast, gene editing speeds up processes that could occur naturally through breeding over many generations, without introducing genes from other species.

Professor Alan Archibald said: “Gene editing gives us a powerful tool to help reduce losses in the farming industry while improving the health and welfare of the animals themselves.”

The US has paved the way by approving a salmon engineered to grow twice as fast as normal, which recently became the first GM animal ruled safe to eat.

Jonathan Lightner, chief scientific officer for Genus PLC, said: “These results are very exciting and further underscore the potential, through gene editing, to provide incredible benefits to the global pork industry, and society as a whole, by improving animal health.

“We look forward to further collaboration with the University on this exciting project.”

Blue ear disease, was first reported in 1987 in North America and is endemic in most pig producing countries.

Jeff Grainger, of Biotechnology and Biological Sciences Research Council which co-funded the study, said: “This is an exciting result that demonstrates the potential for genome editing approaches to enable significant improvements to be made in the health and welfare of farmed animals, and reduce the economic impacts of diseases that are otherwise difficult to manage effectively.”

If gene-edited pigs were given the green light today, it could take as few as five years for meat to be sold, say the team.