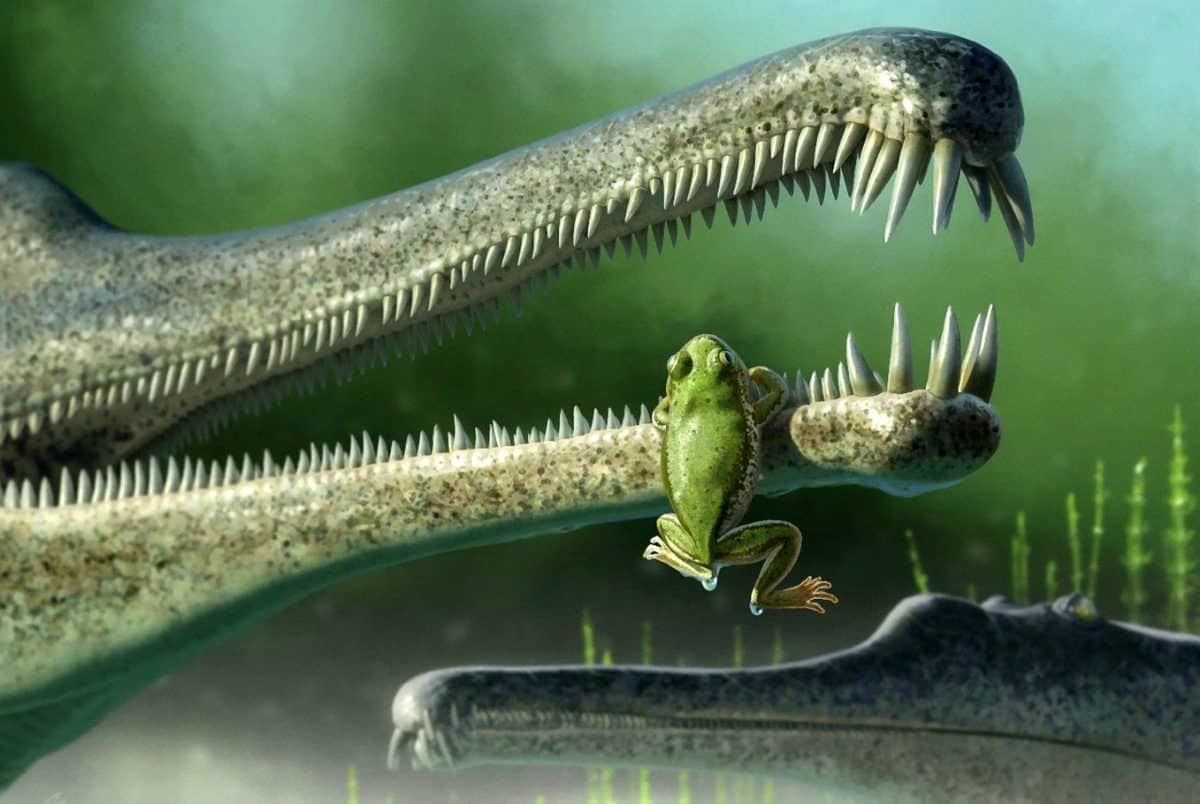 Remains of some of the frog’s oldest relatives – who lived among dinosaurs around 216 million years ago but could fit on the end of your finger – have been unearthed.

Paleontologists have identified fossil fragments of what are thought to be the oldest known frogs in North America.

The fossils comprised of several small pieces of hip bone, called an ilium, from Chinle frogs, a distant long-extinct branch of, but not a direct ancestor of, modern frogs.

The fragments are packed into rock and are smaller than a pinky nail, according to the researchers.

They said the fragments represent the first known and earliest equatorial remains of a salientian – the group containing living frogs, and their most-closely related fossil relatives – from the Late Triassic, roughly 216 million years ago.

The name of the fossil derives from where they were found, the Chinle Formation of Arizona.

Dr Michelle Stocke says the fossils, discovered last May, underscore the importance of microfossil collection and analysis for understanding extinct species whose total length is under three feet.

Dr Stocker, an Assistant Professor of geosciences at Virginia Tech College of Science in the US, said: “This new find highlights just how much there is still to learn about the Late Triassic ecosystem, and how much we find when we just look a little closer.

“We’re familiar with the charismatic archosaurs from the Chinle Formation, but we know that based on other ecosystems, they should make up a small percentage of the animals that lived together.

“With this new focus we’re able to fill in a lot of those missing smaller components with new discoveries.”

Coming from multiple individuals, she said the hip bones are are long and hollow, with a hip socket offset rather than centered.

The bones of the frogs show how tiny they were: Just a bit over half-an-inch long.

Dr Stocker added: “The Chinle frog could fit on the end of your finger.”

Even though the fossils are part of the Chinle frog family, she said they are not yet naming the specific fossils.

Dr Stocker added: “We refrain from naming this Chinle frog because we are continuing to process microvertebrate matrix that will likely yield additional skull and postcranial material that has the potential to be even more informative.”

Dr Stocker said: “These are the oldest frogs from near the equator.

“The oldest frogs overall are roughly 250 million years old from Madagascar and Poland, but those specimens are from higher latitudes and not equatorial.”

Dr Sterling Nesbitt, also an Assistant Professor at Virginia Tech, said: “Now we know that tiny frogs were present approximately 215 million years ago from North America, we may be able to find other members of the modern vertebrate communities in the Triassic Period.”

He said the new discovery also marks the first time that frog fossils have been found directly with phytosaurs, and other early dinosaurs.

Student Rebecca Hawkins, who was part of the Virginia Tech team, said: “I learned first-hand the hard work that paleontologists put into finding fossils.

“Every day you have to brave long treks, heavy loads, scorching heat, and more.

“But, with just the right combination of patience and luck, you can find something truly amazing that makes the toil worth it, like a tiny frog hip that tells a big story.”

Ben Kligman, a Ph.D. student in Geosciences, added: “Our development of methods that recover delicate bones from small-bodied vertebrates enabled this exciting discovery.

“Our aim is to use similar techniques in the Chinle Formation to uncover the early history of other small-bodied animals including lizards, salamanders, turtles, and mammals.”

The findings were published by the online journal Biology Letters.