The Perseverance rover ventured from its landing position on Thursday, two weeks after setting down on the red planet to seek signs of past life. 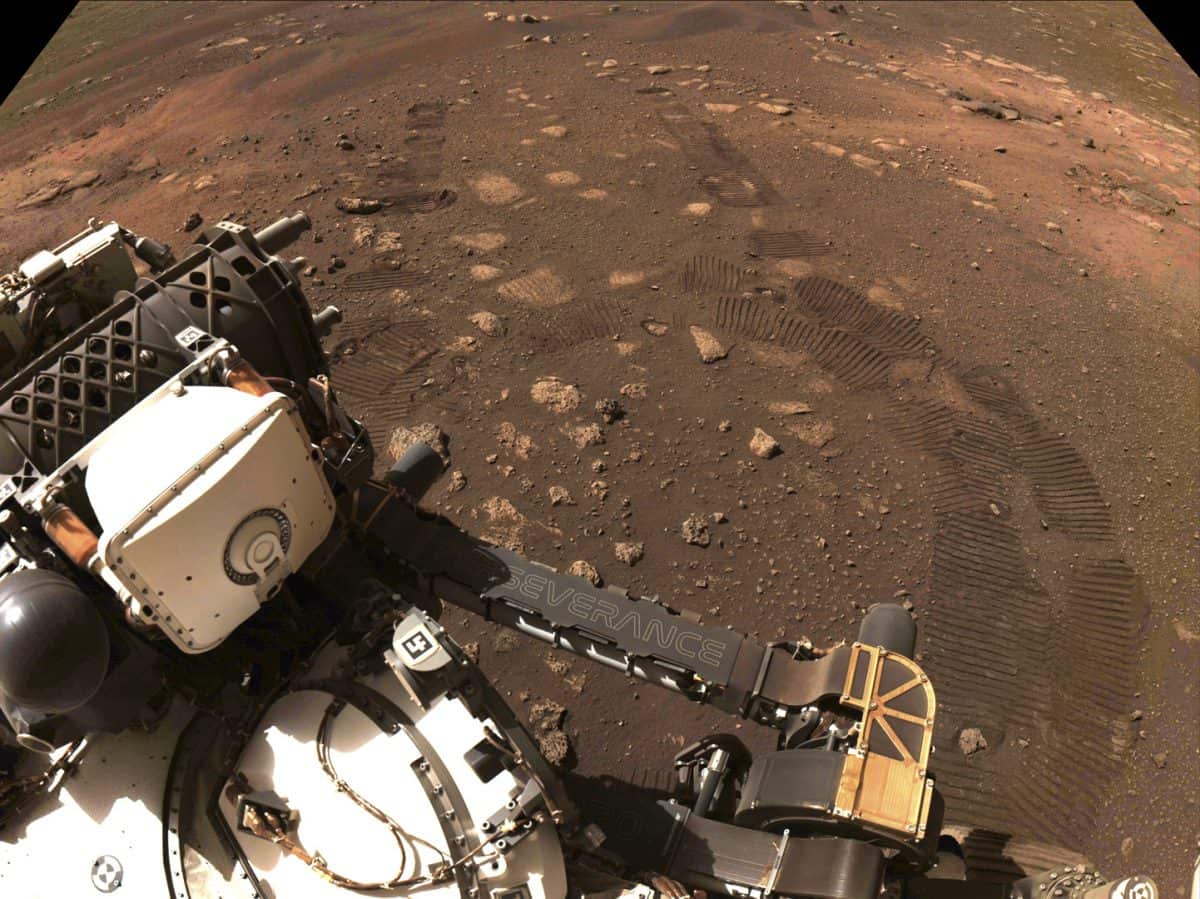 This photo made available by NASA was taken during the first drive of the Perseverance rover on Mars on Thursday, March 4, 2021. Perseverance landed on Feb. 18, 2021. (NASA/JPL-Caltech via AP)

The Perseverance rover ventured from its landing position on Thursday, two weeks after setting down on the red planet to seek signs of past life.

The roundabout, back and forth drive lasted 33 minutes and went so well that more driving was scheduled for Friday and Saturday for the the six-wheeled rover.

“This is really the start of our journey here,” said Rich Rieber, the Nasa engineer who plotted the route. “This is going to be like the Odyssey, adventures along the way, hopefully no Cyclops, and I’m sure there will be stories aplenty written about it.”

In its first drive, Perseverance went forward 13 feet, took a 150-degree left turn, then backed up eight feet. During a news conference on Friday, Nasa’s Jet Propulsion Laboratory (JPL) in Pasadena, California, shared photos of its tracks over and around small rocks.

“I don’t think I’ve ever been happier to see wheel tracks and I’ve seen a lot of them,” said engineer Anais Zarifian.

Flight controllers are still checking all of Perseverance’s systems. So far, everything is looking good. The rover’s seven-foot robot arm, for instance, flexed its muscles for the first time on Tuesday.

Before the car-size rover can head for an ancient river delta to collect rocks for eventual return to Earth, it must drop its so-called protective “belly pan” and release an experimental helicopter named Ingenuity.

As it turns out, Perseverance landed right on the edge of a potential helicopter landing strip — a suitable flat spot, according to Rieber.

Nasa plans to drive out of this landing strip, ditch the pan, then return for Ingenuity’s highly anticipated test flight. All this should be accomplished by late spring.

Scientists are debating whether to take the smoother route to reach the nearby delta or a possibly tougher way with intriguing remnants from that once-watery time three billion to four billion years ago.

Perseverance — Nasa’s biggest and most elaborate rover yet — became the ninth US spacecraft to successfully land on Mars on February 18.

China hopes to land its smaller rover — currently orbiting the red planet — in another few months.

Nasa scientists, meanwhile, announced on Friday they had named Perseverance’s touchdown site in honour of the late science fiction writer Octavia E Butler, who grew up next door to the JPL in Pasadena.

She was one of the first African Americans to receive mainstream attention for science fiction. Her works included Bloodchild and Other Stories and Parable of the Sower.

Related: Britain plans to cut aid to some of world’s most war-torn countries