Parents have blasted a school as “draconian” for measuring the length of girls’ skirts by ordering them to KNEEL on chairs to see how far their hems ride up their thighs. The bizarre measuring technique was outlined by the secondary school in a letter sent to parents in a crackdown on uniform “compliance”. If the […] 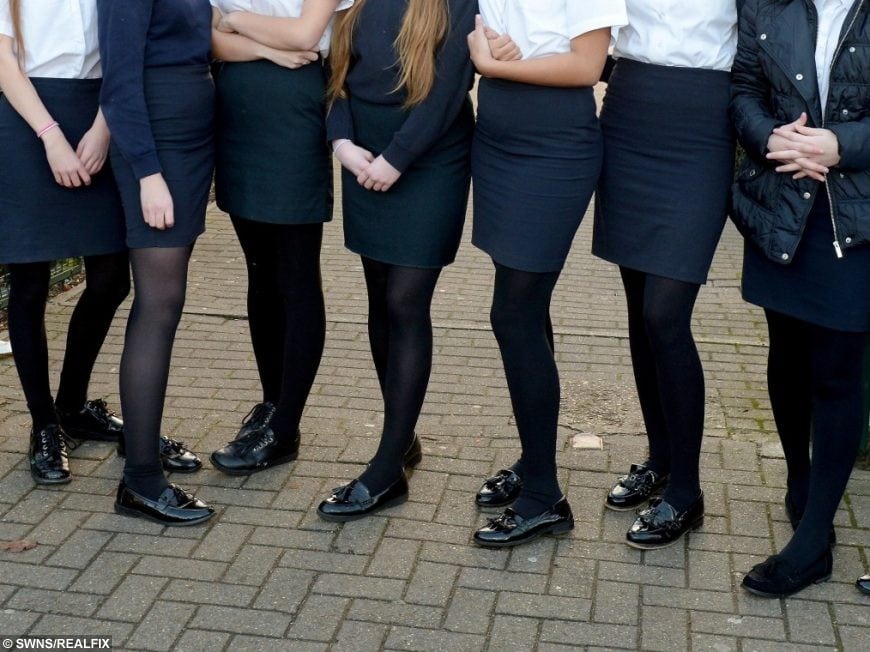 Parents have blasted a school as “draconian” for measuring the length of girls’ skirts by ordering them to KNEEL on chairs to see how far their hems ride up their thighs.

The bizarre measuring technique was outlined by the secondary school in a letter sent to parents in a crackdown on uniform “compliance”.

If the hemline of the skirt is more than 5cm (1.9ins) away from the chair then girls will be ordered home to change into a longer garment.

The new rule, which the school claims is a “simple test for shortness”, follows a series of consultations and surveys on skirt length.

A letter sent from The West Bridgford School in Nottingham read: “We have moved to a position whereby the length of a girl’s skirt will be either compliant with the rules or it will not. “A simple test for shortness can now be used to judge compliance, which is to place a bended knee on a hard surface such as a plastic chair and to measure from the surface of the chair to the hemline; this should not exceed 5cm.”

The school also warned parents that their daughters would be sent home if they found “their skirts to be the wrong length”.

Principal Robert McDonough also warns that: “In order to be both consistent and fair and successful with this is rule change, I must enforce it without exception”.

The page-long letter concludes by saying: “I have no desire to find myself in conflict with parents, instead preferring to get on with the business of educating children.

“I therefore would like to thank you in anticipation of your support for this uniform change.”

The school, which caters for over 1,500 students aged between 11 and 18, decided to clamp down on skirt length at the beginning of the academic year.

On February 22 parents were invited to take part in a “consultation regarding a proposal to change the regulations regarding the length of the girl’s skirt”. Although this led to a new rule that the length between the skirt and the knee should not exceed 5cm, this was scrapped as it, “relied on a value judgement by teachers as to what was ‘appropriate’”.

Speaking about the letter, one 51-year-old parent, who has a daughter in Year 10, said: “It’s absolutely hilarious.

“When we got the letter through, we were in fits of laughter.

“My daughter has been going to the school for four years, but so far this is the only year that they’ve chosen to do anything about skirt length.

“Although the school is very strict on uniform, there wasn’t a policy on skirts, which, as you can imagine, caused havoc.

“They were progressively getting shorter and shorter, and I think they felt the need to do something about it.

“I imagine they must be receiving complaints from a particular parent, as until now nothing have been done about it.

“So far we must have had half a dozen letters about it since the turn of the year.

“There’s been surveys, consultations, changes to the wording of the rules, everything.

“Obviously because of the heat wave, skirts must have got even shorter, and they’ve clearly felt the need to do something about it.

“The school is making a mountain out of a molehill.

“At one stage there was even talk from parents about suggesting the introduction of kilts, which would have been crazy.

“This latest letter really is the peak of it all, though.

“You just can’t imagine girls lining up to kneel down on plastic chairs every day.

“It’s something out of a Victorian girls’ school.”

Another mum, whose two daughters attend the school, added: “I regard the idea of teachers measuring how far their skirts ride up their thighs as highly inappropriate. “It is bordering on sexualising the girls and could make some of the shyer pupils feel quite uncomfortable.

“If a skirt is pulled up then it will sit higher up the leg, it doesn’t necessarily mean they are trying to somehow show more flesh.

“Common sense should say when a skirt is so short it becomes nothing more than a belt, but an inch or two above the knee is hardly outraging public decency is it?”

The school was given an ‘outstanding’ rating in its last Ofsted report in November 2011, before becoming an academy in February 2012.

The uniform for girls is a fully pleated, mid-grey skirt with a blue shirt and blue blazer. Girls also have the option to wear mid-grey trousers.