Wyndham Hacket Pain @WyndhamHP Based on the bestselling novel by Fredrick Blackman of the same name, A Man Called Ove follows Ove, a grumpy old man with a similar facial expression to that of John Sergeant, whose interests include Saab cars, making sure his neighbours are well behaved, and visiting the grave of his wife. […] 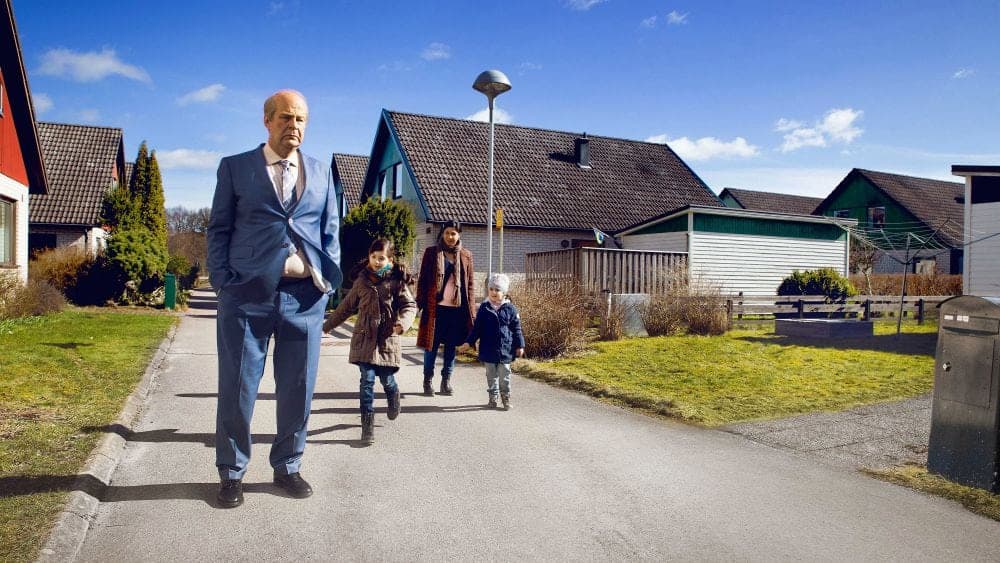 Based on the bestselling novel by Fredrick Blackman of the same name, A Man Called Ove follows Ove, a grumpy old man with a similar facial expression to that of John Sergeant, whose interests include Saab cars, making sure his neighbours are well behaved, and visiting the grave of his wife. When he looses his job of 43 years he is left with nothing better to do than kill himself. What plays out is an inconvenient series of events that get in the way of Ove committing suicide. The main distraction is a young family that moves in next to him and who are unnecessarily friendly. The mother and children are particularly accommodating to Ove’s quirks and bad temper and before long he becomes part of their lives.

In some ways the films central figure represents a kind of everyman. Whatever life throws at him he keeps going and tries to make the best of every situation, best shown when he builds a ram for his disabled wife one night in the pouring rain. He has an admirable resilience that it is hard not to warm to. It is however the softer moments that are the real highlights of the film. A particularly poignant scene is when Ove tells his new neighbour about how his wife became disabled and why they never had children. It is in these instants that you get a sense that his outward anger comes from a deep loneliness and sadness.

Many of the elements that make up the story are fairly familiar and comparisons to Gran Torino and St. Vincent have been made. It is the sincerity of the narrative, though, that keeps the film engaging and entertaining when it could have felt like a rehash of something we’ve seen before.

It can at times feel obvious that the film is adapted from a novel, as there is a lot of wordy dialogue and voiceovers. The script brings humour and affection for the story it tells, but it would be hard to class the film strictly as a comedy, despite there being plenty of darkly comic moments. Overall the storytelling is good, with events told with bold and broad strokes that can, however, at times make proceedings feel a bit sentimental and even saccharine.

It does mean that the plot can be a bit obvious and there are some overly simple visual metaphors, like the railway crossroads that lead Ove to the cemetery. Equally Ove’s softening and increased interest in his immediate community may come as no surprise to viewers but at the same time never feels cynical and is often heart-warming.

In the end A Man Called Ove is a pleasant comic crowd-pleaser that is both entertaining and heartfelt. It is easy to see why it has become one of the most popular Swedish films of all time and I would not be surprised if it pulled off the same trick in the UK. It might be a bit sentimental but there is more than enough charm to make up for it.

A Man Called Ove is in cinemas from Friday 30th June.