"I’m all for criticising Matt Hancock, but to use his disability against him for a cheap shot is beyond shameful," George Aylett said. 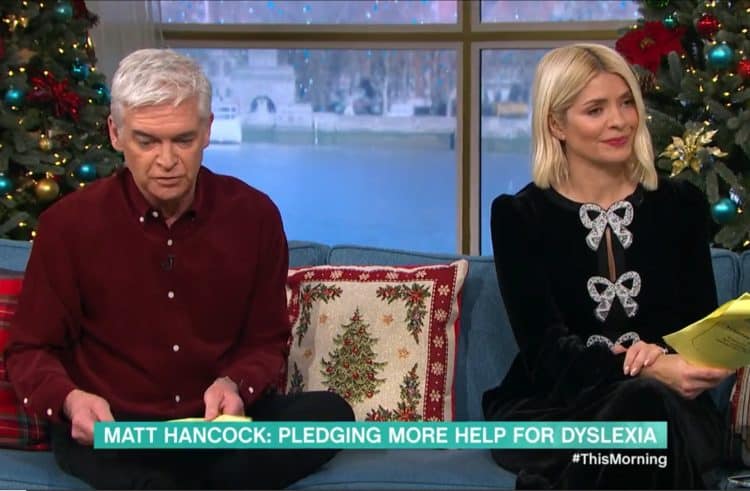 TV presenter Phillip Schofield has been widely reprimanded after he questioned whether former health secretary Matt Hancock broke social distancing rules because of his dyslexia.

Mr Hancock, who resigned in June after admitting to breaching Covid-19 restrictions, is calling for all children to be screened for dyslexia before they leave primary school.

He will introduce a Dyslexia Screening Bill on Tuesday in the House of Commons.

“Was it your dyslexia?”

Appearing on This Morning, Mr Hancock was asked by host Schofield: “Was it your dyslexia that meant you misread the social distancing rules?”

Mr Hancock resigned as health secretary five months ago after leaked CCTV footage showed him kissing an aide, in breach of social distancing rules he had helped establish.

He replied: “No, I can’t blame that on dyslexia or anything else. In fact, I am not asking for any special favours because I am dyslexic.

“In politics I have got some things to offer. In that case, that was a mistake and I have apologised for it.

“It was a failure of leadership because I came on shows like this and asked people to do things and I didn’t follow the those rules myself.”

On his successor in the role, Mr Hancock said: “I think that Sajid Javid, who’s doing the job, is doing an excellent job.”

Asked by Schofield whether Mr Javid was doing a better job, he replied: “Who knows? Because there’s so many uncertainties and new things hitting us like the new Omicron variant, but I think he’s doing a great job.

“But, you know, in those jobs, the pressures are big but that’s no excuse. It was a failure of leadership on my part and I’ve apologised for that.”

Dyslexia is a common learning difficulty that can cause problems with reading, writing and spelling, but unlike a learning disability, intelligence is not affected.

Mr Hancock was not diagnosed with dyslexia until he went to Oxford University.