One Russian journalist called for the contest to be bombed with a "Satan missile", while heavy shelling was reported in Ukraine shortly after the event concluded. 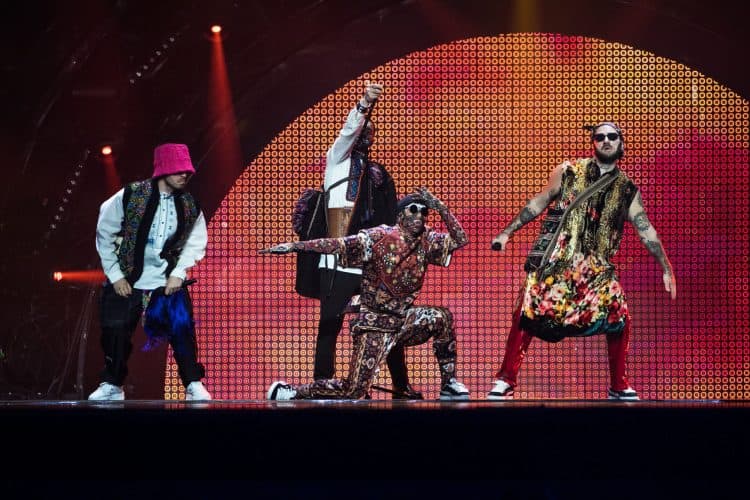 The act have been the frontrunners since Russia’s invasion – which prompted organisers to ban the country from competing.

The country joined the contest in 2003 and its three wins make it one of the most successful of the newer competitor countries – having triumphed in 2004 and 2016.

Receiving the coveted trophy, Kalush Orchestra said: “Thank you for supporting Ukraine. This victory is for every Ukrainian. Slava Ukraini.”

During their performance, which combined rap and Ukrainian folklore, the group were dressed in elaborate outfits, including long multi-coloured fringed ensembles.

“Next year Ukraine will host Eurovision!

“For the third time in its history. And I believe – not for the last time.”

Among those offering messages of congratulations, former Doctor Who star John Barrowman said: “Congratulations #Ukraine on your #Eurovision Win!

“Stick that where the sun don’t shine #VladimirPutin.”

She suggested the contest in Turin, Italy, should be bombed with the R-36M rocket, which in the NATO classification is called “Satan”.

The contest is hugely popular in Russia, with some suggesting a win for Ukraine will plunge them into “soul-crushing despair”.

Shortly after the victory, Russia launched missiles on Wester Ukraine.

According to reports, an infrastructure target near Lviv was hit and more bombs were dropped on Azovstal steelworks in Mariupol.

But there was positive news elsewhere.

Russian troops are said to be retreating from Kharkiv, the country’s second largest city, after bombarding it for weeks, and Moscow’s forces continue to engage in a grinding battle for the country’s eastern industrial heartland.

Ukraine’s military said the Russian forces are now pulling back from the north-eastern city to focus on guarding supply routes, while launching mortar, artillery and air strikes in the eastern region of Donetsk in an attempt to “deplete Ukrainian forces and destroy fortifications”.