Commons Defence Committee chairman Tobias Ellwood added that ‘we have allowed this to happen’. 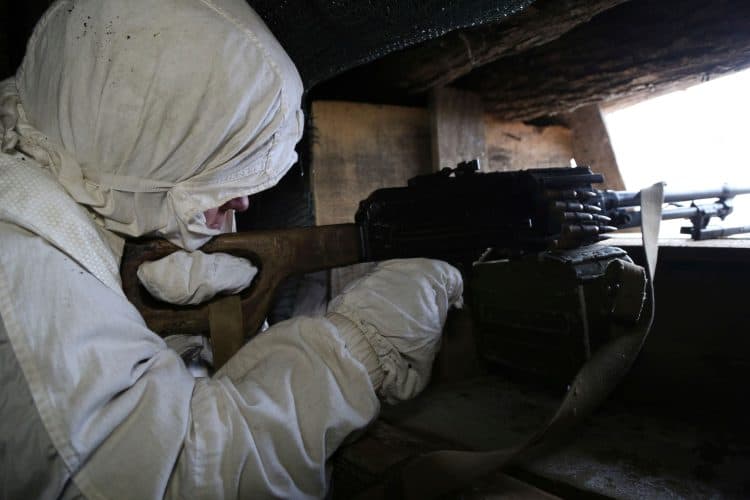 The Conservative MP made the claim in the wake of a massive cyber attack on Ukraine which left much of the country without heat, light and access to money.

Speaking to the Daily Mail about the incident, which experts believe was an attempt by President Vladimir Putin to destabilise Ukraine prior to a physical invasion, Mr Ellwood said: “I am afraid an invasion by Russian forces is inevitable and imminent and we have allowed this to happen.

“We had the opportunity to place sufficient military hardware and personnel in Ukraine to make president Putin think twice about invading but we failed to do so.”

He added: “Only president Putin knows what he is going to do next, but next week would seem pivotal.

“He has negotiated himself into a corner and after Nato refused to bow to his threats seemingly only one option remains.”

In a subsequent tweet, Mr Ellwood wrote: “RUSSIA is on the brink of an invasion. And once again will try to re-draw the map of Eastern Europe. History will ask – why did we not learn from history?”

On Saturday, Foreign Secretary Liz Truss condemned Russia’s military build-up on the Ukraine border and called on Moscow to “halt its aggression”.

She tweeted: “Russia is waging a disinformation campaign intended to destabilise and justify an invasion of its sovereign neighbour Ukraine.

“Russia must halt its aggression, deescalate and engage in meaningful talks.”

An invasion by Russia into Ukraine would violate the “most basic freedoms and sovereignty”, the Defence Secretary said last week following a visit to Scandinavia.

Issuing his second warning in a week to Moscow, Ben Wallace said there would be “consequences” of any Russian aggression towards Ukraine.

Tensions on the Ukrainian border continue to be fraught, with the US suggesting Moscow is preparing for a “false-flag operation” in order to spark an incursion into neighbouring territory.

The Defence Secretary said: “The UK and our Nordic partners are united in our approach to upholding European security.

“My discussions this week have been directly about deepening bilateral relations, shared security and the consequences of Russian aggression towards Ukraine.

“Our discussions were clear that a Russian invasion of Ukraine would be a strategic mistake, violating the most basic freedoms and sovereignty.

“Britain and the Nordic countries have a long and shared history.

“Our European neighbours and allies remain vital partners as we work together to defend our common values, counter shared threats and build resilience in our neighbourhood, the UK will always stand with them.”