Ukrainian officials have warned for weeks that any announcement of a Russian retreat should be treated sceptically. 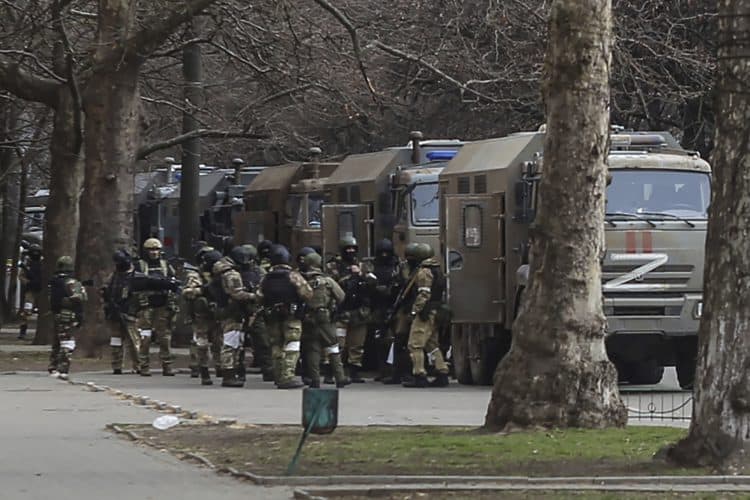 Ukrainian officials have acknowledged that Russian troops had no choice but to flee a key southern city.

But they stopped short of declaring victory in Kherson, even after Moscow said it began a retreat that would represent a humiliating defeat in the grinding war.

It was difficult to know what was happening in the strategic port city, from which tens of thousands have fled in recent weeks.

Some Western observers, including the highest-ranking US military officer, said they believed the Kremlin’s forces have been forced to pull out — though a full withdrawal could take some time.

Ukrainian officials have warned for weeks that any announcement of a Russian retreat should be treated sceptically.

They have accused Moscow of plotting to lure Ukrainian troops into an ambush and said Russian soldiers have donned civilian clothes in an effort to melt into the city’s population.

But on Thursday, Ukraine’s armed forces commander-in-chief, Valeriy Zaluzhny, said that “the enemy had no other choice but to resort to fleeing”, since Kyiv’s army has “destroyed logistical routes and supply system, disrupted the system of the enemy’s military command” in the area.

Still, he said that Ukrainian military could not confirm or deny that Russian forces were indeed withdrawing from Kherson as the Russian Defence Ministry reported.

The ministry said there was a “manoeuvre of units of the Russian group” to the opposite side of the Dnieper River from where Kherson lies, a day after ordering a withdrawal.

But another senior Ukrainian official offered another reason to be wary of any pullback: Presidential adviser Mykhailo Podolyak alleged Russian forces had laid mines throughout Kherson, saying they wanted to turn it into a “city of death”.

Moscow took Kherson soon after the invasion on February 24 — the only provincial capital it has captured — and illegally annexed the wider region of the same name in September.

A forced pull-out from the city would mark one of Russia’s worst setbacks and recapturing Kherson could allow Ukraine to win back lost territory in the south, including Crimea, which Moscow illegally seized in 2014.

A Russian retreat is also almost certain to raise domestic pressure on the Kremlin to escalate the conflict.

Ukrainian officials have been cautious throughout the war in declaring any victories against a Russian force that at least initially outgunned and outmanned them. But their outright scepticism of Russia’s announcement of a withdrawal was unusual.

Army General Mark Milley, chairman of the US Joint Chiefs of Staff, said a day earlier that he believed a retreat was under way.

“The initial indicators are they are in fact doing it. They made the public announcement they’re doing it. I believe they’re doing it in order to preserve their force to re-establish defensive lines south of the (Dnieper) River, but that remains to be seen,” he said at The Economic Club of New York.

Gen Milley said Russia had amassed 20,000 to 30,000 troops in Kherson and a full retreat could take several weeks.

One analyst noted that the Ukrainian army has been systematically destroying bridges and roads for several months, making a quick transfer of Russian troops from one side of the river to the other an impossibility.

“The main question is whether the Ukrainians will give the Russians the opportunity to calmly withdraw, or fire at them during the crossing to the left bank,” Ukrainian military analyst Oleh Zhdanov said.

“With the rapid withdrawal of troops, the Russians are at great risk. The bridges are in very poor condition — the personnel can be taken out on boats, but the equipment needs to be taken out only on barges and pontoons, and this is very easily shelled by the Ukrainian army.”

A think tank that tracks the war also said the withdrawal appeared genuine.

“The Russian withdrawal from the west bank of the (Dnieper) is unlikely to be a trap meant to lure Ukrainian troops into costly combat near Kherson City,” the Institute for the Study of War wrote in an update.

“ISW has previously observed many indicators that Russian forces, military and economic assets, and occupation elements have steadily withdrawn … and Russian officials have been anticipating and preparing for withdrawal in a way that is incompatible with a campaign to deceive and trap Ukrainian troops.”

But Nato Secretary General Jens Stoltenberg was more guarded, insisting the West needed to wait and see “how the situation on the ground develops in the coming days”.

“But what is clear is that Russia is under heavy pressure. And if they leave Kherson , it would be another victory for Ukraine,” he said at a press briefing in Rome.

Meanwhile, the head of Ukraine’s eastern Donetsk region, Pavlo Kyrylenko, said on Thursday that three civilians had been killed in the region and another 12 wounded in the last 24 hours.

Writing on Telegram, the official also reported that law enforcement officers had found the bodies of five people killed during the Russian occupation of the town of Yarova, which was retaken by Ukraine on September 19.

The shelling wounded a 80-year-old woman and damaged 10 residential buildings, a gas station, a gas pipeline and a power line.

The neighbouring Zaporizhzhia region was also shelled on Thursday morning, according to deputy head of Ukraine’s presidential office Kyrylo Tymoshenko.