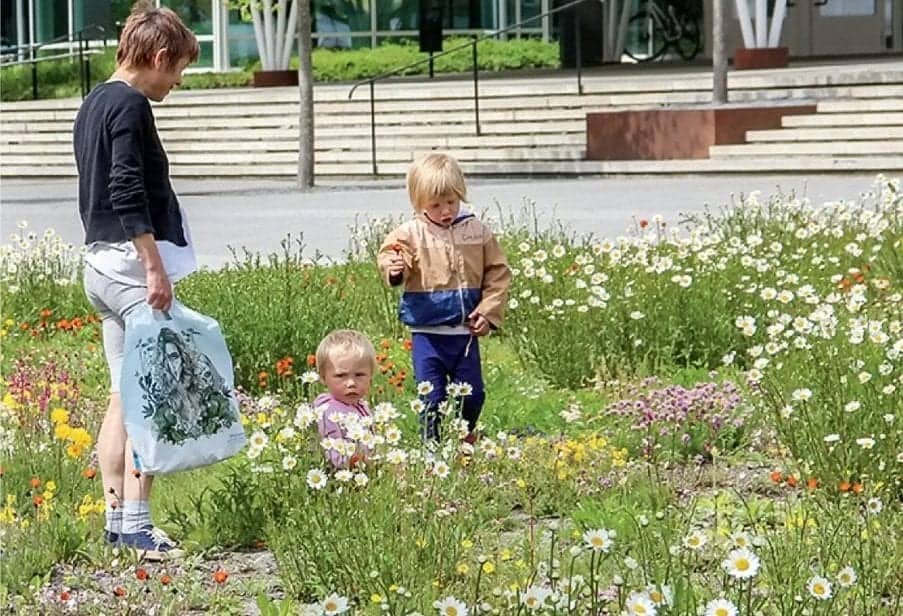 The great British weed-free lawn is bad for the environment because it is killing biodiversity, according to new research.

The grasses are becoming invasive by wiping out weeds that, although dreaded by gardeners, play a vital role in the ecosystem’s balance attracting bees.

While caring for lawns waste and contaminate water while mowing causes air pollution.

Instead, home owners should let their gardens grow wild to attract more wildlife such as bees and other pollinators, say scientists.

The UK invented the domestic lawn, where there are now an estimated 15 million.

They became mainstream in the 19th century, after the invention of the mower.

But Professor Maria Ignatieva and Dr Marcus Hedblom say they “exact environmental and economic costs” – and these may become worse with climate change.

Writing in Science, they add: “It is time to consider new alternative ‘lawnscapes’ in urban planning as beneficial and sustainable alternatives.

Although widespread, they have received less attention from the scientific community compared to urban trees or any other types of green areas.

Designers, planners and politicians have tended to highlight the positive ecosystem services, especially the aesthetic and recreational benefits, without considering the harms.

Recent heat waves and droughts have raised concerns about their effects on global warming.

In arid regions of the US, lawn irrigation accounts for three quarters of the total annual household water consumption.

Another concern is the contamination of ground or runoff water due to overuse of fertilisers, herbicides and pesticides.

The researchers said they “may well have yet unknown negative consequences for human health through plastic particles.”

“The main intent of lawn care is to keep the dominance of only a few species and eliminate the presence of others, all considered as lawn weeds.”

They said the reason behind lawn uniformity may lie in its origin.

Grass plots in ornamental gardens most likely first appeared in medieval times and were probably obtained from the closest pastures and meadows.

In the 17th century, the role of lawns increased in the decorative grounds of geometrical gardens.

For example, in iconic French Versailles, short-cut green grass was perfectly blended with the ideology of the power of man over nature.

The researchers said: “The English landscape, or the ‘natural’ style of the 18th century, introduced an idealised version of urban nature.

“Grazed grasslands with scarcely planted shade trees and the ‘pleasure ground’ next to the mansion with a short, smoothly cut lawn.”

With the introduction of mowers and lawn-seed nurseries, the English pastoral vision flourished further in the public parks during the second half of the 19th century.

In the 20th century, the modernistic prefabricated landscape was based on the same English picturesque model as the ‘natural’ landscape, which was often mistaken for ecological quality.

The researchers said the most dramatic implementation of new lawn thinking is in Berlin where spontaneous vegetation is accepted as a fundamental landscape design tool.

In Gleisdreieck Park and Sudgelande Nature Park, both established on abandoned railways, some areas were left to ‘go wild’ – enabling them to be colonised by spontaneous vegetation.

Prof Ignatieva and Dr Hedblom said: “Recent research in the United Kingdom and Sweden showed that people desire to change the monotonous lawn to a more diverse environment.

“Grass-free lawn is one of the latest movements in both nations and is based on the use of low-growing native (in Sweden) or native and exotic (in the United Kingdom) herbaceous plants without the use of grasses.

“The goal is to create a dense biodiverse and low-maintenance mat, which can be used for recreation.”

Added Prof Ignatieva and Dr Hedblom: “The use of colours such as grey, silver, yellow and even brown in lawn like covers can add a feeling of real nature.

“Thus, one crucial challenge is how to accelerate people’s understanding of sustainable alternatives and acceptance of a new vegetation aesthetic in urban planning and design.”