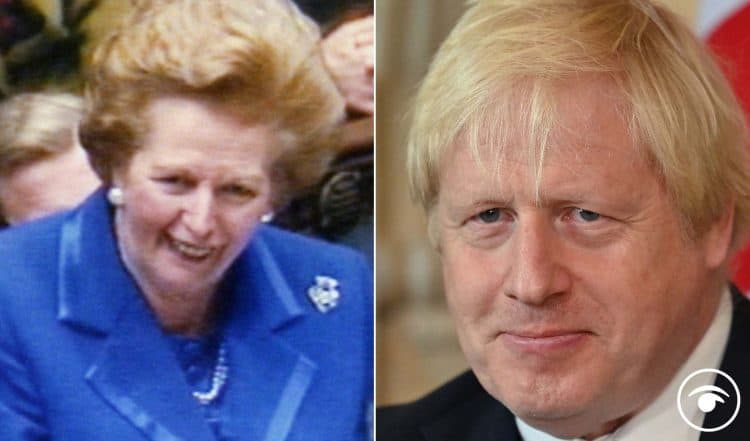 Margaret Thatcher wrongly told MPs that a British Airways flight landed in Kuwait before the invasion by Iraq had begun, according to newly released files.

The revelations she misled parliament come as Boris Johnson concedes homes may need to be sold to fund social care costs, severely watering down manifesto commitment.

The Thatcher documents show that officials believed it might have been possible to turn the flight away if the Foreign Office had warned the airline an Iraqi incursion was under way.

Flight BA149 landed in Kuwait in the early hours of August 2 1990 and within hours, more than 300 passengers and crew had been detained by invading Iraqi troops.

The Foreign Office has now released its files on the flight amid long-standing claims that the Government allowed it to go ahead, even though they knew of the danger it was in because it was carrying a Special Forces team it wanted to infiltrate into the country.

The papers include an exchange of correspondence from September 1992 between the then prime minister Sir John Major and John Prescott, then the shadow transport secretary, who had been pressing for details of what happened.

In his reply, Sir John insisted there were no British military personnel on board the flight.

He also said that while Iraqi troops had been massing on the border there was no “firm evidence” that Saddam Hussein was about to invade, still less occupy, the whole of Kuwait.

However, a briefing note prepared by PM Nixon, an official in the Foreign Office Middle East Department, disclosed that the Government was being less than frank about what it new about the Iraqi troop movements.

“We have never made public the fact our ambassador in Kuwait telephoned the (Foreign Office) resident clerk before BA149 landed in Kuwait to say that Iraqi troops had crossed the border,” he noted.

“At the time, we had no reason to believe that the Iraqis would carry on and launch a full-scale invasion.

“The resident clerk did not inform the Department of Transport who might have been able to turn the flight away from Kuwait.”

Mr Nixon also expressed concern that when Mrs Thatcher answered questions about the flight in the Commons in the immediate aftermath of the invasion she may have misled Parliament.

The then prime minister said the flight landed and the passengers and crew disembarked before the invasion, adding: “The invasion was later.”

Mr Nixon wrote: “The then prime minister’s statement to the House of Commons on September 6 1990 may have given the impression that the aircraft landed before Iraqi troops crossed the border.

“This was not the case. The flight landed after the initial incursions but before the full-scale invasion was apparent.”

Boris Johnson has risked further angering Tory MPs by seemingly watering down a manifesto commitment with a concession that some people may have to sell a home to pay for social care costs.

The Prime Minister narrowly succeeded in getting the Commons to back his new policy to cap care costs in England as his majority was slashed by Conservative rebels and those who chose not to vote for the move.

Backbenchers criticised the change to the £86,000 cap to only include individual payments and not the contributions of local authorities because it will cost poorer recipients more in assets than the wealthy.

Ahead of the vote on Monday night, Downing Street declined to say whether the reforms would fulfil a Tory pledge at the last general election to guarantee “nobody needing care should be forced to sell their home to pay for it”.

But Mr Johnson apparently downgraded the commitment by telling his Cabinet that “no one will be forced to sell a home they or their spouse is living in as it will not be counted as an asset”, according to No 10’s account of the meeting on Tuesday.

The Prime Minister’s official spokesman insisted the policy was the “correct approach” when asked if the remark was an admission some may have to sell their homes to pay for care.

He also said there is “no intention” to change the policy with another U-turn as it stoked backbench resentment further following the Owen Paterson affair.

Ministers staved off a potential defeat in the Commons when MPs backed the Government’s amendment to its reforms with a majority of 26.

But that was a major cut to the Prime Minister’s working majority of around 80 MPs, as 19 Conservatives including former Cabinet minister Esther McVey and ex-chief whip Mark Harper rebelled to oppose the plans.