The Brexit vote has been likened to “turkeys voting for Christmas” after it was revealed the hardest hit areas were the ones most likely to vote for it. A leaked government study detailing economic forecasts of how regions will fare over the next 15 years revealed most regions will be worse off after Britain leaves […]

The Brexit vote has been likened to “turkeys voting for Christmas” after it was revealed the hardest hit areas were the ones most likely to vote for it.

A leaked government study detailing economic forecasts of how regions will fare over the next 15 years revealed most regions will be worse off after Britain leaves the EU, but some will fare worse than others.

Ironically, the West Midlands and the North East, which voted overwhelmingly to leave the EU, are set to loose out the most regardless of how the negotiations play out.

London, which voted heavily to remain, is expected to have the least negative impact.

You didn’t vote for this.

Nobody offered this, so you can’t possibly have voted for it.

So no, this ISN’T democracy; you’re wrong. You’re being forced to accept something you didn’t vote for and never would.

Labour’s shadow Brexit minister Paul Blomfield has said: “These figures are further evidence of why the Tories must rethink their reckless approach to the Brexit negotiations. 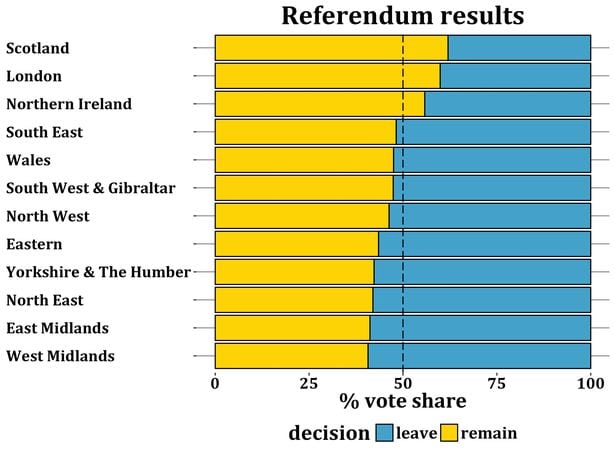