Loud music, including the songs 9 To 5, I Need A Dollar and Money, Money, Money were played through speakers. 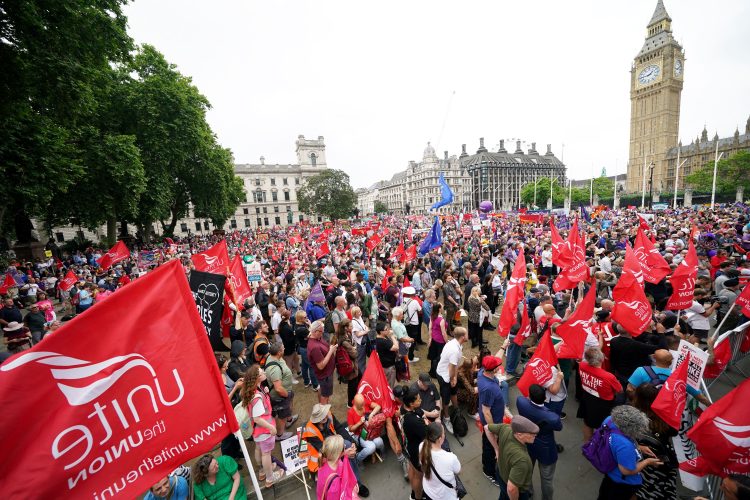 Thousands of protesters gathered in central London to demand action from the Government to combat the cost-of-living crisis.

The crowds began a march from Portland Place to Parliament Square at 12pm for a rally, with speakers including Frances O’Grady, general secretary of the TUC, which is organising the event.

The TUC says its research suggests that workers have lost almost £20,000 since 2008 because pay has not kept pace with inflation.

Banners reading “Cut war not welfare” and “End fuel poverty, insulate homes now” were carried by demonstrators. Others read “Nurses not nukes”, “Don’t get angry, get active” and “Free Assange”.

People in the crowd whistled, cheered and clapped as a blue flare was set off to mark the beginning of the march.

Loud music, including the songs 9 To 5, I Need A Dollar and Money, Money, Money were played through speakers, as people sang and danced along.

Ben Robinson, 25, who works for a housing charity in Brixton, south London, and Frankie Brown, 24, a teacher, were at the protest.

Ms Brown said: “Every day I have got kids in my class who are going home to homes where they don’t have enough to eat.”

Mr Robinson said: “We’ve got residents who are coming into our offices who are choosing between feeding their own kids, not themselves, their own kids, and paying rent and heating, and that is just not a choice that anyone should have to face, you know, in the fourth biggest economy in the world.”

He added: “I don’t think there’s enough recognition in the Government, actually, how bad things are going to be and really are for people, real people who don’t have enough money.

“And the growing disparity between the very richest in society and the other 99% of people who just don’t have enough to get by, so hopefully this outlines that, but who knows?”