Many lives were “irreparably ruined” after the subpostmasters lost their jobs, homes and marriages. 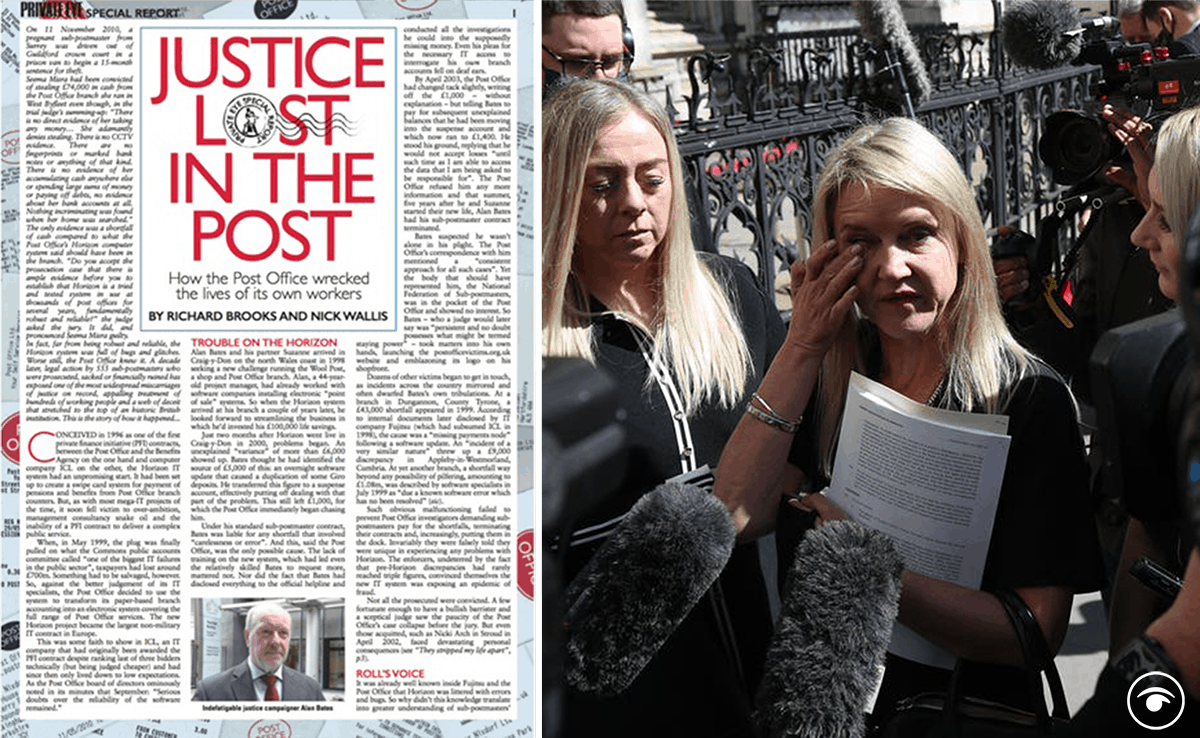 A Private Eye report into subpostmasters who were sacked due to the Post Office’s defective Horizon accounting system came to a head today after all 42 finally had their names cleared by the Court of Appeal.

Their lives were “irreparably ruined” as they lost their jobs, homes and marriages after they were prosecuted by the Post Office – which knew the Fujitsu-developed IT system had “faults and bugs from the earliest days of its operation”, the Court of Appeal heard last month.

Lawyers representing 42 former subpostmasters said evidence of serious defects in the Horizon system was “concealed from the courts, prosecutors and defence”, in order to protect the Post Office “at all costs”.

Their convictions were referred to the court by the Criminal Cases Review Commission (CCRC) last year following a landmark High Court case against the Post Office.

The Post Office conceded that 39 of the 42 former subpostmasters should have their convictions overturned on the basis that “they did not or could not have a fair trial”.

But it opposed 35 of those 39 cases on a second ground of appeal, which is that the prosecutions were “an affront to the public conscience”.

At the Royal Courts of Justice in London on Friday, 39 of the former subpostmasters finally had their names cleared.

Announcing the court’s ruling, Lord Justice Holroyde said the Post Office “knew there were serious issues about the reliability of Horizon” and had a “clear duty to investigate” the system’s defects.

But the Post Office “consistently asserted that Horizon was robust and reliable” and “effectively steamrolled over any subpostmaster who sought to challenge its accuracy”, the judge added.

An affront to justice

The Court of Appeal also allowed the appeals on the basis that their prosecutions were an affront to justice.

Lord Justice Holroyde, sitting with Mr Justice Picken and Mrs Justice Farbey, said: “Post Office Limited’s failures of investigation and disclosure were so egregious as to make the prosecution of any of the ‘Horizon cases’ an affront to the conscience of the court.”

However, three of the former subpostmasters – Wendy Cousins, Stanley Fell and Neelam Hussain – had their appeals dismissed by the court.

Lord Justice Holroyde said the Court of Appeal had concluded that, in those three cases, “the reliability of Horizon data was not essential to the prosecution case and that the convictions are safe”.

The magazine was one of the first to investigate the case as part of a report entitled: Justice Lost in the Post: How the Post Office wrecked the lives of its own workers”.

Several social media users pointed to the publication’s unwavering commitment to the case, with Tom Jamieson calling the episode “horrific beyond belief”.

Private Eye readers will know how long the mag pursued the Post Office Horizon scandal years before anyone else. Superb today to see justice done for the 39 former Postmasters who have had their convictions quashed. Horrific beyond belief what they endured.