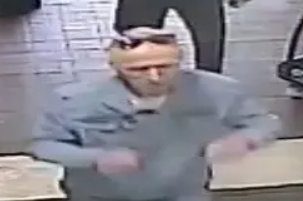 Police have released a picture of this man in the first official hunt for an ‘upskirter’ suspect since new laws were introduced.

The horrified victim – a 21-year-old woman – was at a Wilko store in Banbury in Oxfordshire on Monday May 13.

She was shopping at 1pm when another woman approached her and said that a man had taken a photograph up the victim’s skirt.

She then reported the incident to police and officers have now released a CCTV image of a man they want to speak to in connection.

It is believed to be the first public hunt for a suspected upskirter after new laws about the sick crime came into force in April.

PC Anthony Cossar of Thames Valley Police said: “We are releasing a CCTV image of man who we believe may have vital information about the incident.

“If you are the man, or know who he is then please contact the force as soon as possible.

“We are also want to speak to the female witness who informed the victim that the offence had taken place.

“If you have information about the man in the CCTV, believe you know who the witness is, or have any information that may help our investigation then please come forward.”

It came into force on April 12.