The images are shocking. 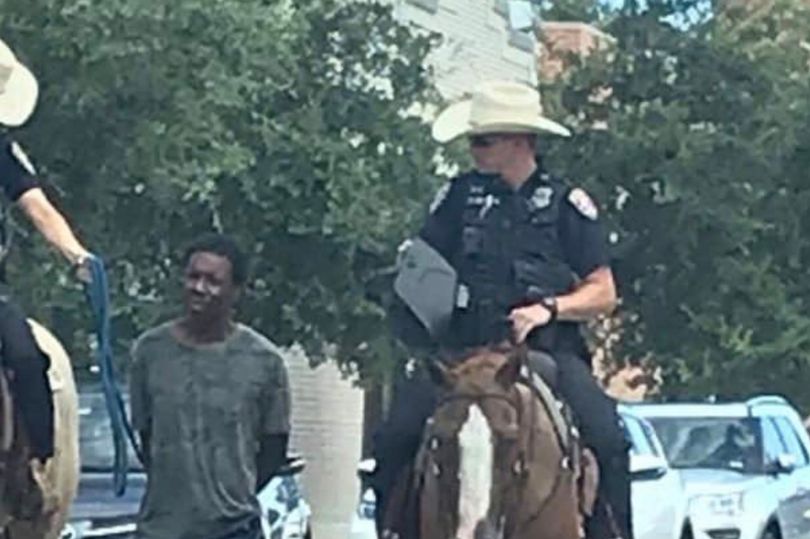 Photographs that were shared on social media show Donald Neely, 43, flanked by two mounted police officers puling him by a rope, images that will disgust people around the world.

The incidentin Galveston, Texas, has led to a public outcry at the suspect’s treatment. Galveston police have now said it would end the practice.

In a statement, the police force said a “transportation unit was not immediately available at the time of arrest”.

Neely’s sister-in-law Christin Neely said in a Facebook post her brother is a “homeless and mentally ill” father of eight.

“’Imagine that YOU are aware that living on the streets is dangerous, unsanitary, makes you a target for crime/law enforcement and isolates you from your family but YOU CAN’T make that relative understand that despite your many efforts,” she wrote.

“Imagine searching the streets of a city for days looking for your loved one, to no avail. Have any of you ever went to breakfast, lunch and dinner at the local homeless shelters hoping you’d find your loved one having a meal with hopes to kidnap them and bring them home.

She added: “Imagine scrolling Facebook and seeing said loved one being escorted to jail on foot by two officers on horses, hands cuffed behind his back with a rope attached. In 2019????

“He was treated like an animal paraded through the streets by two incompetent a**holes.

“I have read some of the most hateful and insensitive comments in concern to the incident involving my BIL (brother-in-law) Donald Neely’s recent arrest by police. People don’t even understand the depth of mental illness and how it affects the person and their family.

“WE HAVE TRIED AND ARE CONTINUOUSLY TRYING TO BRING HIM HOME. Please continue to pray for my family.”

“This is 2019 and not 1819,” James Douglas, the president of Houston’s NAACP, told the Houston Chronicle.

“I am happy to know that Chief Vernon [Hale] issued an apology and indicated that the act showed poor judgment, but it also shows poor training. Even though the chief indicated that the technique would be discontinued he failed to address the lack of respect demonstrated by the officers in the episode.”