Scientists from ZSL found that sharks that lived near human populations of 10,000 or more in the central Indian Ocean were fewer and smaller purely due to humans. 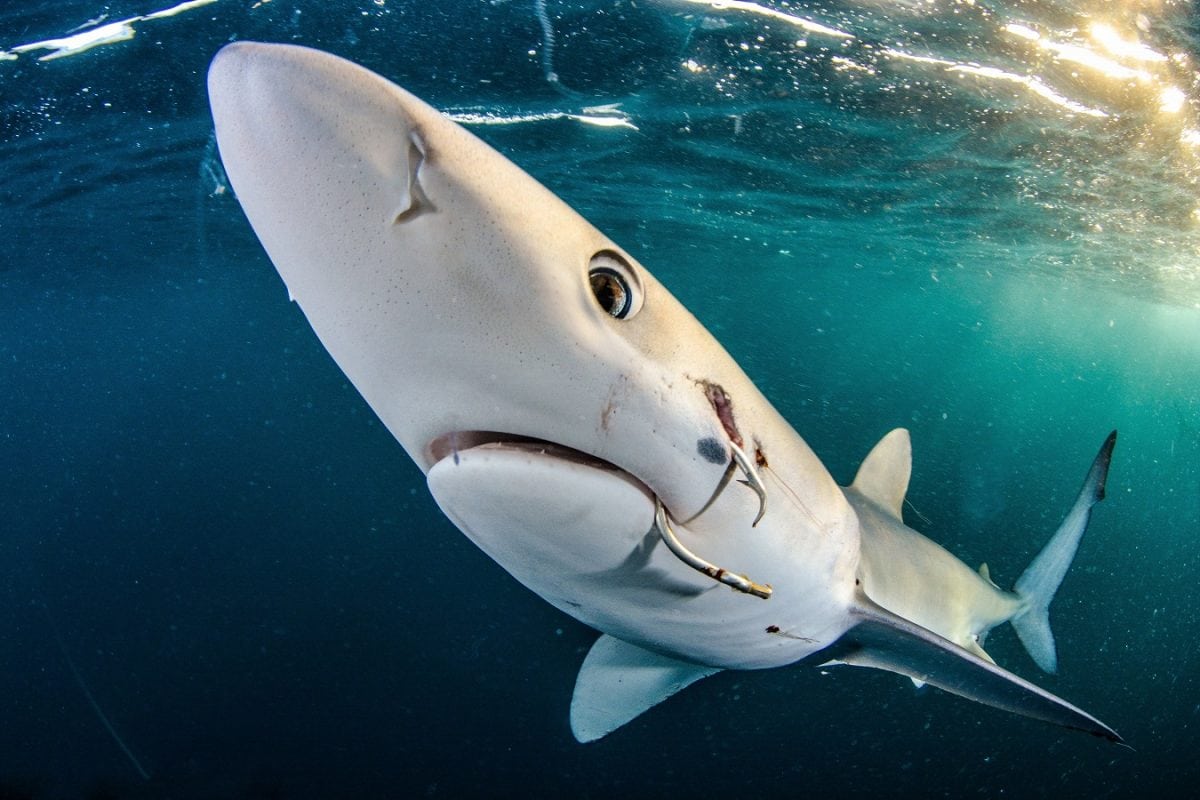 Gold in Sharks category - Jim Machinchick from the US. Blue shark with a hook in its mouth taken in the US. Credit;SWNS

Sharks and marine predators need to live at least 1,250 km from humans in order to thrive, a new British report claims.

A study of the predators in the central Indian and Pacific Oceans showed that numbers dropped off significantly and the size of the sharks grew smaller near cities with at least 10,000 humans.

But the reach of fishing vessels was such that they still had an impact up to 1,250 miles away from human settlements, far further than previous studies have suggested.

The report by Zoological Society of London (ZSL) and published in the journal PLOS Biology also suggests that rising sea temperatures could also hit marine predators.

“Just 13% of the world’s oceans can be considered ‘wilderness’ but sharks and other predators are much more common and significantly larger at distances greater than 1,250 kilometres from people.

“This suggests that large marine predators are generally unable to thrive near to people and is another clear example of the impact of human overexploitation on our seas.”

The team used cameras attached to cannisters filled with bait to attract predators.

They analysed video footage taken at 1,041 sites across the Indian and Pacific Oceans, selected to test the biggest possible range of conditions and habitats, looking at predators such as tuna, rainbow runner, mahi-mahi and black marlin as well as sharks.

Sites varied in proximity to fish markets and human populations, with some close to cities and others up to 1,500 kilometres away.

Sharks were only observed at 12% of sites monitored but in the areas away from man they thrived on remote and shallow seabed features, such as seamounts, submerged banks and reefs.

The team concluded that the average body size and number of sharks and other marine predator fell significantly in proximity to cities with more than 10,000 people and associated fishing fleets.

They also discovered that sea surface temperature had a strong influence on predators’ average body size, with a marked decrease at more than 28°C, which could become a problem if global temperatures continue to rise.

Dr Letessier added: “Large marine predators and sharks in particular play a unique and irreplaceable role in the ocean ecosystem.

“They control populations of prey species, keep those populations healthy by removing sick or injured animals, and transport nutrients between loosely connected habitats over vast distances.

“Our study found that shallower water habitats, of depths less than 500 metres, were vital for marine predator diversity.

“We therefore need to identify sites that are both shallow and remote and prioritise them for conservation.

“However, there are still numerous shallow hotspots in the vicinity of human markets that are not appropriately protected and this must change.

“Existing large, no-take zones need to be better enforced and extended to focus on the last refuges where these extraordinary animals remain abundant.