"The officer was also found guilty of using racist and homophobic slurs against Romanians, using the words "two black blokes" and "benders" during a team meeting." 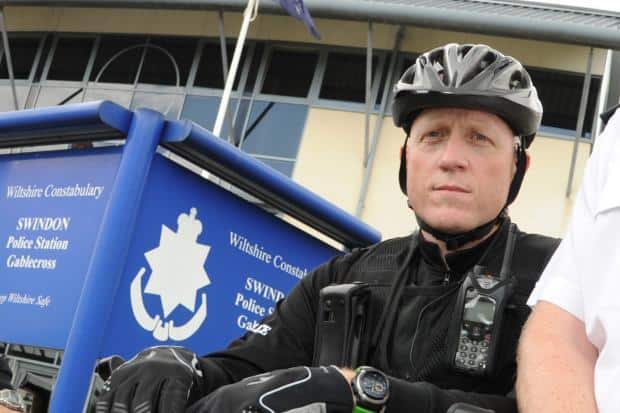 A police constable has managed to keep his job despite being found guilty of gross misconduct – after sharing an image of a man trying to post a letter through a burqa.

PC Andrew Sexton, who has served with Wiltshire Police since 1997, admitted sending the offensive image at a five-day misconduct hearing last week.

The image, which was stamped with the words “Should have gone to Specsavers”, shows a caucasian man trying to post a letter into the eye opening of a woman’s burqa.

PC Sexton told the panel that he sent the image to colleagues in a fit of frustration over being told contradictory information during a live police drug operation last year.

The officer was also found guilty of using racist and homophobic slurs against Romanians, using the words “two black blokes” and “benders” during a team meeting.

But despite the panel finding him guilty of misconduct and gross misconduct, Swindon-based PC Sexton has been allowed to keep his job.

He has received a final written warning, which will stay on his record for an extended five-year period.

Panel chairman Derek Marshall told the hearing, at Wiltshire Police’s headquarters in Devizes: “There is no room in the police service for racists or homophobic views or behaviours.”

The panel heard PC Sexton admitted sending an image of a white man trying to post a letter into the eye opening of a woman’s burqa with the caption “should have gone to Specsavers” on the picture.

He told the panel the picture was sent in a fit of frustration at being told contradictory information during a live, high-pressure police drugs operation.

He was having to relay the information via email, as he was working from home during the early days of the pandemic and did not have his police radio.

He had apologised immediately and referred the matter to his sergeant and an inspector responsible for diversity.

PC Sexton, who now works on an elite squad responsible for gathering intelligence on drug gangs, said it had not occurred to him at the time that the image might be offensive.

He said: “The male in that [image] didn’t know his left hand from his right hand. He was confused.”

The officer was previously placed on a support plan in September 2019 requiring him not to use derogatory language in the workplace.

He said he agreed to go on the “informal action plan” because his sergeant told him he may be causing offence without realising it.

The officer, originally from Australia and formerly of the Australian federal police, said: “It was put to me that someone in the office was upset about language that I may have used.

“Therefore to prevent further upset I had to be mindful of my language.”

Further allegations were laid against the officer while he was subject to the “plan”.

These included that he used the phrase “black blokes” to refer to two alleged drug dealers that had been arrested as a result of a briefing to response officers.

PC Sexton was said to have made an offensive remark about Romanians in the office.

In paperwork sent to Wiltshire’s professional standards department, he appeared to admit to saying: “I am sure Romania has many nice people in it.

“But I have never met any of them so I associate that country with bulk shoplifters and criminals.”

And during a team meeting in August 2020, he said in a discussion about joint working with another force: “Once we get an in, then they will know we are not benders.”

He was rung immediately afterwards by his sergeant, who told him she wanted to speak about a comment he made.

He identified the word and asked if it was homophobic.

“She said yes. My world fell out at that point. I was a mess,” PC Sexton told the panel.

He said he had never used the word before and had not used it as a homophobic slur.

PC Sexton suggested it could have been a reference to “banana bender”, an Australian slang term for someone from Queensland and taken to mean a timewaster.

PC Sexton had swiftly apologised after the offensive nature of his comments were pointed out, the panel heard.

Mark Ley-Morgan, for Wiltshire Police, accused the officer of telling the panel a “pack of lies”.

He said the conversation PC Sexton had with the second sergeant was not recorded.

Quizzing him on the “black blokes” comment, the barrister asked: “Is it your evidence you would have said if they were white ‘I’m going to go down and speak to the officers who arrested those white guys last night’?”.

PC Sexton admitted: “No, probably not.”

He said: “What has been the key issue so far as policing is concerned all over the world in the last couple of weeks? How police treat ethnic minorities.

“It seems it is on the news any day. We’ve just had the anniversary [of George Floyd’s murder by a police officer]. It is there all the time.

“It was there all the time during the time these comments were being made.”

Maria Brannan, representing PC Sexton, presented 11 character references to the panel in support of her client.

She also noted he had received four official commendations – including a Chief Constable’s commendation.

The panel found proved allegations that PC Sexton sent the offensive image, made the comments about Romanians, “black blokes”, and “benders”.

He was found guilty of gross misconduct and misconduct.

He was given a final written warning and will be placed on a “support plan” for five years.

Following the hearing, Deputy Chief Constable Paul Mills said: “Wiltshire Police is proud to be an inclusive and diverse organisation.

“It is very important that all our officers and staff feel confident to report anything that they feel is inappropriate, unfair or unlawful.

“As a Force, we remain committed to robustly and proportionately tackling inappropriate behaviour in the workplace and supporting those who report wrongdoing.

“I would like to pay testament to the bravery of those who raised concerns in relation to the actions of PC Sexton.”