“If we want to preserve the habitat of these amazing mammals, then we need to focus on the root of the problem, which is slowing global climate change.” 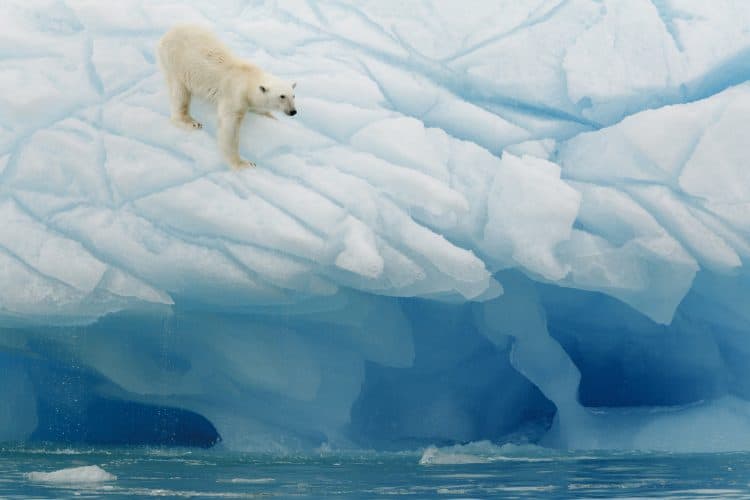 Polar bears are having to scavenge on abandoned whale carcasses because their hunting grounds are melting into the sea, scientists have warned.

The bears’ numbers are down 30 per cent in places where rising global temperatures are melting the sea ice and cutting them off from their favourite snacks, according to a new study.

Without the ice sheet, they can no longer access shallow waters which are teeming with fish and seals, one of their favourite meals and bulk up for the winter.

Instead, they are having to travel long distances further north or inland to forage for other kinds of food to survive.

Now, scientists at Washington State University in the United States have discovered just how far their usual hunting grounds have expanded since the turn of the century.

Author Dr Anthony Pagano said: “Having to travel farther means these bears are expending more energy which can threaten their survival.

“If we want to preserve the habitat of these amazing mammals, then we need to focus on the root of the problem, which is slowing global climate change.”

Data on the movement patterns of female polar bears in the Beaufort Sea area north of Alaska between 1986 and 2016 which had been collected using satellites was analysed by the researchers.

It revealed that over the past two decades, polar bears were being forced to travel further from their habitual hunting grounds on the continental shelf to remain on the receding sea ice.

The continental shelf is a shallow water habitat extending 100 miles north of Alaska and Canada, which contains plenty of fish for the bears’ favourite snack, seals.

During the early summer months, bears will often double their body weight from preying on seals while they are weaning their pups and are most vulnerable to attack.

But because sea ice over the continental shelf is receding earlier and further, the bears are venturing further north, into deeper waters, where there are fewer seals to prey on.

Dr Pagano said: “The combined impact of having to move farther and farther north with the ice in the summer and then having to move back in the fall and winter as the ice freezes is taking a major toll.

Around 20 per cent of the polar bears in the Beaufort Sea area are leaving their traditional sea ice hunting grounds altogether during the summer and autumn, the researchers also found.

Instead, they are moving inland along the Alaskan and Canadian coast, looking for food such as carrion, berries and bowhead whale carcasses left by indigenous residents who hunt them.

Dr Pagano said: “Sometimes you’ll have 50 to 100 polar bears that congregate around these whale carcasses and compete with each other for food.

“As more and more bears move on land, I suspect there’ll be a lot more competition for these food resources and we’ll probably start seeing further decreases in abundance and survival.”

The researchers are planning to investigate further how bears are moving inland to better understand how they are coping with their new environment.

Curbing global carbon emissions is the best way of preserving the southern Beaufort Sea’s 800 or so remaining polar bears, the researchers say, as it is the main cause behind melting arctic sea ice.

Reducing these emissions to avoid global warming greater than two degrees celsius help these animals to survive by “drastically” slowing the decline of their natural habitat.

Dr Pagano said: “Coming across a polar bear while flying over the arctic in a helicopter is a surreal experience.

“They are incredibly massive and impressive.

“It is amazing to observe this animal that is so uniquely adapted to exist in this harsh arctic environment.

“They are worth the effort it will take to preserve them.”

The findings were published in the journal Ecosphere.