A pair of YouTube pranksters convinced Corbyn to take an envelope stuffed with £10,000... in Monopoly money. 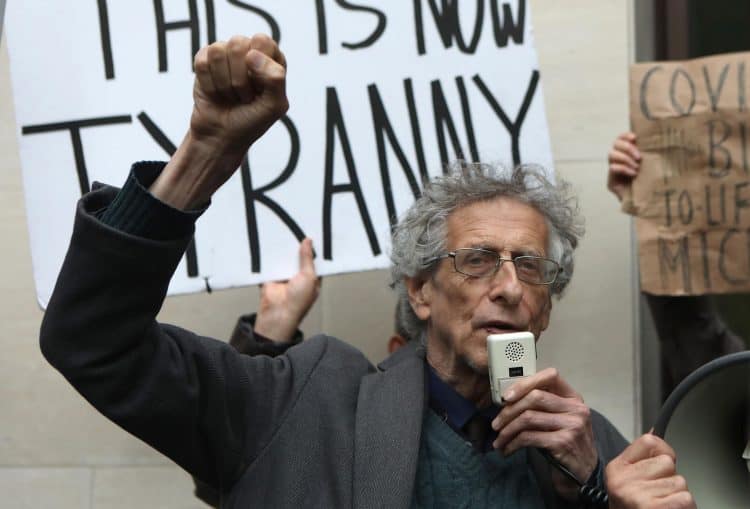 Piers Corbyn was tricked into accepting a fake £10,000 bribe to stop criticising the AstraZeneca vaccine, a pair of pranksters have claimed.

Josh Pieters and Archie Manners – a pair of YouTube pranksters – posed as investors in the life-saving jab, duping conspiracy theorist Piers into accepting ‘cash’ on the condition he stops criticising AstraZeneca.

The duo filmed the encounter, revealing how they convinced Corbyn – the brother of the former Labour leader – to take £10,000. But what he actually accepted was an envelope full of Monopoly money in exchange for a promise to focus his anti-vaccination rants on other jabs.

In the clip – which quickly went viral on social media – comedian Pieters purchases shares in AstraZeneca worth £100 so he could legally pose as a stakeholder in the company.

They then got in touch with Corbyn via an email proposing a donation to his anti-lockdown campaign, ‘Stop New Normal’. They arranged a meeting in Sloane Square, London, in a restaurant fitted with hidden cameras.

Yesterday @archiemanners and I convinced anti-vaxxer Piers Corbyn to take £10,000 he thought came from AstraZeneca to stop criticising their vaccine. Except it was monopoly money and we recorded the whole thing. https://t.co/XfW1deStQk

Once the meeting begins, Pieters says: “One of our main interests, funnily enough, is we have share holds in the AstraZeneca vaccine.

“Can you believe that? It’s not from a personal standpoint, it’s more of a case that it’s good business.”

The comedian adds: “If we can help your campaign in any way then that’s obviously going to help us. We’ve got shared interests.

“We actually even brought something along today that is just a token of our intention of helping out with your campaign.”

Brandishing £10,000 in an envelope, the duo ask Corbyn if he can focus his anti-vax ire on Pfizer and Moderna in his campaigning, to which Corbyn responds: “Yeah.”

Pieters concluded: “Whether people choose to get a vaccine or not is entirely their business. But listening to people who spread misinformation about vaccines, particularly when they are willing to accepting £10,000 made from vaccines is a different matter altogether.”

Responding to the realisation he had been duped, Corbyn told MailOnline: “The video has been very heavily edited with dishonest commentary and leaves out my repeated statements that anything we accept has to be unconditional.

“It is false that I agreed any change in policy whatsoever and I stated to these imposters that all Covid vaccines are dangerous and we weren’t changing any of our views against vaccines and vaccine passporting.

“The video starts off with a false claim. The emails they sent said nothing at all about the interests of these gentleman.

“This was only revealed at the meeting. He claimed he made his money from a restaurant chain and later said he had an investment in a vaccine company which made him feel guilty and he wanted to give a gift because of his feelings of guilt.

“I agreed nothing about limiting or changing what we have been and will continue to say about the various Covid vaccines.”