After 73 years of marriage, the Queen will say farewell to Philip during a televised funeral service at St George’s Chapel in Windsor Castle this afternoon. 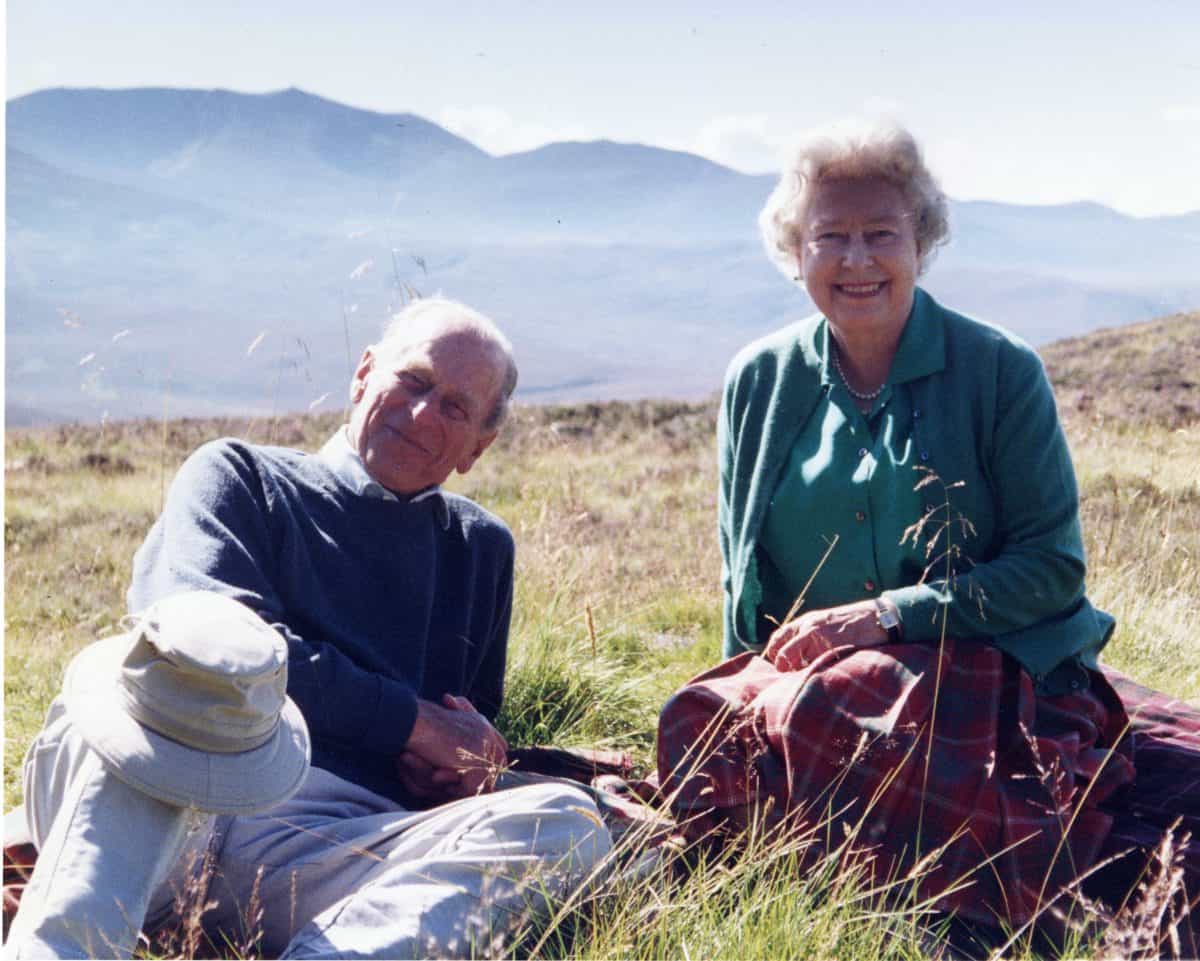 Handout image released by Buckingham Palace on 16/04/21 of a personal photograph of the Queen Elizabeth II and the Duke of Edinburgh at the top of the Coyles of Muick, taken by The Countess of Wessex in 2003. Issue date: Friday April 16, 2021.

The Duke of Edinburgh’s “unwavering loyalty” to the Queen and his “courage, fortitude and faith” will be marked at his funeral.

After 73 years of marriage, the Queen will say farewell to Philip during a televised funeral service at St George’s Chapel in Windsor Castle on Saturday, attended by a small group of close family and friends.

Covid regulations have reduced the scope of the service with public elements cancelled, mourners reduced from around 800 to just 30, and all guests wearing face masks and sitting apart.

A touching photograph of the Queen and Duke of Edinburgh giving a glimpse of their lives away from protocol and ceremony was released on the eve of Philip’s funeral.

The royal couple are pictured as they are rarely seen – relaxing together during a summer break and enjoying the stunning scenery of the Scottish Highlands on the Balmoral estate.

No sermon will be delivered during the ceremonial royal service on Saturday afternoon, in keeping with Philip’s wishes.

His love of the sea and long association with the Royal Navy permeates the Order of Service, with the music chosen by the duke including the hymn Eternal Father, Strong To Save – traditionally associated with seafarers and the maritime armed services.

The Dean of Windsor, in the Bidding, will pay tribute to Philip’s “kindness, humour and humanity”.

“With grateful hearts, we remember the many ways in which his long life has been a blessing to us,” he will say of Philip, who died aged 99 last Friday.

“We have been inspired by his unwavering loyalty to our Queen, by his service to the nation and the Commonwealth, by his courage, fortitude and faith.

“Our lives have been enriched through the challenges that he has set us, the encouragement that he has given us, his kindness, humour and humanity.”

The Prince of Wales and Princess Royal will lead the Duke of York, Earl of Wessex and other family members walking behind the duke’s coffin, carried on a Land Rover hearse he helped design, during the funeral procession which the Queen will join, travelling by car.

Royal brothers the Duke of Cambridge and Duke of Sussex, who have a troubled relationship, will not walk shoulder to shoulder but with their cousin Peter Phillips between them.

Philip’s love of carriage-driving will be a poignant feature of his funeral, with his carriage, which he designed, and ponies making an appearance.

The polished dark green four-wheeled carriage, accompanied by two of Philip’s grooms, will stand in the Quadrangle of Windsor Castle as the duke’s coffin is carried past in the procession.

Among the mourners will be the Duchess of Cornwall, Duchess of Cambridge, Countess of Wessex and her children Viscount Severn and Lady Louise.

Also attending will be the children of the Queen’s sister Princess Margaret, three of Philip’s German relatives and his close friend Countess Mountbatten of Burma.

The Queen was photographed driving in the grounds of Windsor Castle on Friday and during the day was back at work receiving calls from General David Hurley, Governor-General of Australia, and Canada’s Prime Minister Justin Trudeau.

It is understood the calls were made by the national figures to convey their condolences to the Queen.

Philip’s children and grandchildren have been paying tribute to his life and legacy, and welcoming the support and warm words from the public who have left flowers and cards.

In the grounds of Windsor Castle on Friday, the Earl and Countess of Wessex viewed cards and flowers left by the public and appeared touched by the tributes to the duke.

While looking over handwritten letters from children, Sophie could be heard saying “how sweet” before speaking to her husband Edward about the number of bouquets that have been gathered.

She was also heard to suggest there would have been many more tributes if coronavirus restrictions had not been in place.

The couple, who were joined by their daughter Lady Louise Windsor, spent around 15 minutes looking at hundreds of flowers and wreaths outside St George’s Chapel.

Among them were floral tributes from Prime Minister Boris Johnson, Scotland’s First Minister Nicola Sturgeon and the Royal Navy – which the duke was associated with for much of his life.

Lord Chartres, a former bishop of London, said the Queen would be under “extraordinary pressure” during the Duke of Edinburgh’s funeral as she mourns her husband in public.

The retired Church of England bishop, who was understood to be close to Philip, told BBC Radio 4’s Today: “I hope that today people really will be sending up a prayer for the Queen and for the other members of the royal family because having to grieve in public is an extraordinary pressure and something that most of us would not really want to do.

“But it is part of their life and their world, and I hope today, and I’m sure, that people won’t forget the personal dimension in the formal ceremonies.”

Lord Chartres said the duke had a “very practical” Christian faith, adding: “I always remember preaching on occasions which he was principal actor that the instruction would always come down: ‘No more than four minutes’.

“He was at home with broad church, high church and low church, but what he really liked was short church, and I think that-one was left in no doubt about that.”

The peer described Philip as a “very questioning, curious and deeply committed person”.