“I’m in a situation now where I desperately need a colonoscopy test, every day I’m left thinking could it be cancer? I’m also waiting for my doctor which is just as difficult, how do you see a doctor?," Mr Perks has asked. 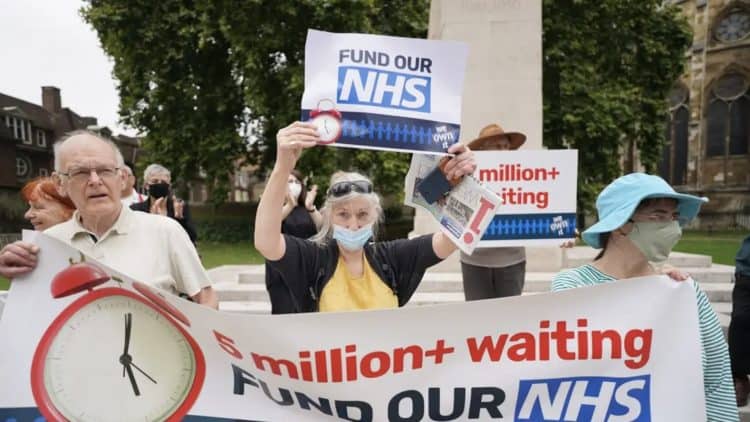 A retired engineer has said the backlog of NHS cases has left him in “limbo” as he is unable to get treatment for a health condition.

Tony Perks, 74, from Bracknell, Berkshire, suffers from issues with his intestine but says he has been waiting to get a colonoscopy test for two-and-a-half years.

He was one of around 20 protesters demonstrating outside Parliament from the group We Own It, which campaigns against privatisation.

The protesters, who gathered on Saturday afternoon, could be heard telling each other of their experiences of waiting for treatment, chanting and holding up signs which read “Fund our NHS” and “Keep our NHS public”.

Mr Perks told the PA news agency: “I’m in a situation now where I desperately need a colonoscopy test, every day I’m left thinking could it be cancer?

“I’m also waiting for my doctor which is just as difficult, how do you see a doctor?

“If you go there you have to stand outside and they speak to you through some glass.

“I’m just in limbo at the moment and I’m very concerned because I have other issues as well.”

He added: “I don’t expect to be treated any differently to anyone else but I’d like to be seen and get some treatment – it’s had a mental effect, you start to dwell on what the problem is.”

The group blamed the backlog on “underfunding” from the Government over the past 10 years.

They called on Boris Johnson to inject at least £20 billion in to the health service to maintain hospitals and equipment, and increase staffing.

Cat Hobbs, director of We Own It, said: “The protest was fantastic, people feel really passionately about this issue, it directly affects people.

“We’ve had stories from people whose parents are on waiting lists, one lady talked about her mother’s experience and we’re getting lots of similar stories from other supporters.

“We know in the country as a whole, 5.5 million people, just in England, are on waiting lists, waiting for essential care.

“These are things that are really alarming for people to be waiting for, things like cancer, ear, nose and throat operations and hip replacements.”