The arrivals came as it was reported asylum seekers will have to obey strict rules in new centres or face their claims being rejected in plans advocated by Patel. 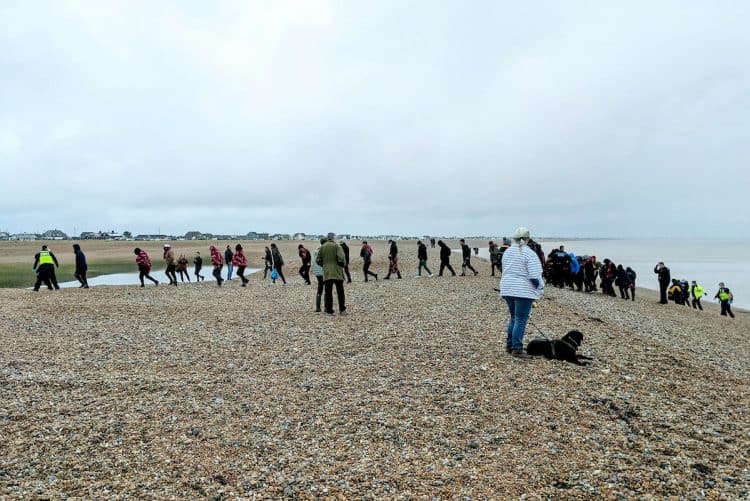 Hundreds of migrants were rescued from the sea by RNLI lifeguards after crossing the Channel in small boats.

Adults and young children wrapped in blankets were seen being led up the beach in Dungeness, Kent on Saturday (20/11).

They were helped by lifeguards from RNLI Dungeness after attempting to seek asylum before the winter weather makes the journey too difficult.

At least four dinghies packed with dozens of people reportedly reached the shore, as well as a lifeboat bringing in more from out at sea.

Others arrived at Folkestone and Dover harbours, brought in by authorities.

Border Force agents and police were on the scene as well as three coaches to pick the migrants up and take them to be processed.

Paul Fenney, 40, from Folkestone, Kent, was walking with his family when he saw the queues of migrants disembarking the lifeboat at about 3.30pm.

He said: “This is the first time I’ve seen it, I’m used to seeing it on the TV.

“There was quite a lot of men and I never actually saw their faces, they were just looking down.

“I saw a few children and I did see a female with a new born baby being escorted away by a female paramedic.

“I couldn’t believe I was seeing it really.”

The arrivals came as it was reported asylum seekers will have to obey strict rules in new centres or face their claims being rejected.

These plans are advocated by Home Secretary Priti Patel.

The migrants will add to the 24,700 who have crossed in small boats already this year, tripling the 8,404 who arrived last year.

Related: Watch: MP defends Patel following claims that she is a ‘moron’ and all civil servants ‘hate her’