American officials fear they will not be able to effectively sanction Putin because of Russian money “entrenched” in London. 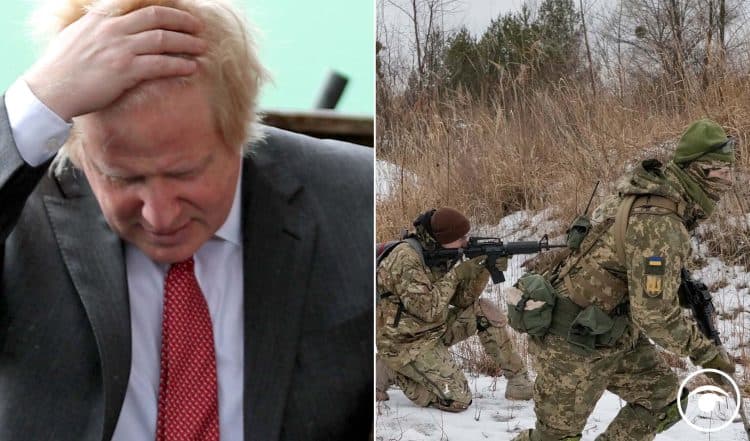 Labour has accused the Prime Minister of “playing catch up with other world leaders” on deterring Russian aggression against Ukraine.

Shadow defence secretary John Healey said the Government is “paralysed by a mess of its own making” domestically as Boris Johnson awaits the highly anticipated “partygate” report from senior civil servant Sue Gray.

He reiterated Labour’s calls for the imposition of a “register of overseas entities” to “lift the veil on who owns property and assets in the UK”, after it was reported that American officials fear they will not be able to effectively sanction President Vladimir Putin because of Russian money “entrenched” in London.

Mr Johnson is understood to be planning a visit to the troubled region in the coming days and is expected to speak to the Russian president in a phone call.

On Friday, The Times cited a Washington source as saying: “The fear is that Russian money is so entrenched in London now that the opportunity to use it as leverage against Putin could be lost.

“Biden is talking about sanctioning Putin himself but that can only be symbolic. Putin doesn’t hold his money abroad, it is all in the kleptocrats’ names and a hell of a lot of it is sitting in houses in Knightsbridge and Belgravia right under your Government’s noses.”

Mr Healey also said Companies House should be reformed to “crack down on shell companies”, and called for the introduction of “tougher regulation on political donations”.

He said: “The UK must do everything to face down Russian aggression through diplomacy and deterrence.

“But the Prime Minister is playing catch up to other world leaders – rather than leading from the front. The UK must play our part in maintaining the international unity needed in support of Ukraine, by creating the toughest package of possible sanctions.”

Asked last week if he would support Labour’s proposals to “rid the UK of the loot of the corrupt Russian elite”, Mr Johnson told the House of Commons that the Government was “bringing forward measures for a register of beneficial interests”.

His comments came amid speculation that planned legislation on tackling economic crime had been scrapped.

But business minister Paul Scully said on Wednesday that “there has been nothing pulled at all”.

It is understood that Mr Johnson will “ramp up deterrence to avoid bloodshed” between Russia and Ukraine with a visit to the region in the coming days and will also speak to Mr Putin on the phone.

A Downing Street spokeswoman said: “The Prime Minister is determined to accelerate diplomatic efforts and ramp up deterrence to avoid bloodshed in Europe.

“He will reiterate the need for Russia to step back and engage diplomatically when he speaks to President Putin this week.”

This weekend, the Prime Minister will consider a range of options to alleviate Russian aggression in the region, including fresh deployments and bolstering Nato’s defences following a Ministry of Defence meeting.

The Foreign Office is also expected to announce tougher sanctions on Monday, meaning the UK can target Russia’s strategic and financial interests.

Foreign Secretary Liz Truss previously said Russia would face “severe sanctions” in the event of an incursion into Ukraine.

“We are urging Russia to desist from an incursion and we’re making it very clear that if they were to do that there would be severe economic cost to Russia – severe sanctions.”

On what these sanctions could look like, she said: “They would target individuals, they would target financial institutions and they would be co-ordinated with all of our allies across Europe, the United States and others.”

Ms Truss also said the UK was not ruling out support for personal sanctions against Mr Putin in the event of a Russian incursion.

She made the comments after US President Joe Biden suggested moving to penalise the Russian president could be an option in the case of an invasion.

When asked on Tuesday if he could see himself sanctioning Mr Putin in those circumstances, Mr Biden told reporters: “Yes, I would see that.”

Asked if the UK would support personal sanctions against the Russian president, Ms Truss told BBC Radio 4’s Today programme on Wednesday that the Government had “ruled nothing out”.

Ms Truss has been forthright in speaking out against Russia’s threatened invasion of Ukraine, and took the unusual step of declassifying intelligence which suggested President Vladimir Putin was plotting to install a pro-Moscow leader as head of the government in Kyiv.