Liz Truss has argued that the recession forecast by the Bank of England is “not inevitable”, as she insisted her swift tax cuts are needed rather than Rishi Sunak’s slower approach. 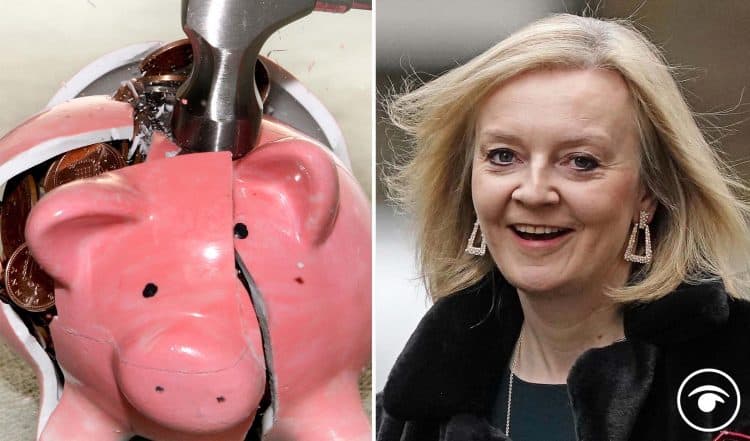 The papers on Friday focus solely on the expected recession as readers are told to ‘batten down the hatches’.

However, Liz Truss has argued that the recession forecast by the Bank of England is “not inevitable”, as she insisted her swift tax cuts are needed rather than Rishi Sunak’s slower approach.

The Foreign Secretary used Sky’s televised debate for the Tory leadership contest to warn of “very, very difficult times” without “bold” action rather than her rival’s caution.

Allies of Mr Sunak, the former chancellor, have argued that Ms Truss’s “dangerous” approach would risk further stoking inflation, which is already forecast to hit 13%.

Labour shadow minister Conor McGinn used the debate as evidence that the Tories, with their “their low-growth, low-wage plans”, will not be able to fix the economic crisis.

“The two continuity candidates have no answers to sky-high inflation, rocketing energy bills and the lengthy recession the Bank of England has warned is on the horizon,” he said.

Fears about Britain’s “big squeeze” are splashed across the front pages as the working week concludes.

The Guardian reports the Bank of England (BoE) has raised rates and warned of 13% inflation, The Times says “Britain slides into crisis” and the Daily Express tells its readers to “batten down the hatches”.

The BoE has warned of a year-long recession, according to the Financial Times and The Independent, while Metro and i refer to the time ahead as “the big squeeze”.

The recession will cause the biggest income drop on record amid surging energy prices, says The Daily Telegraph.

“Just where are our leaders?” asks the Daily Mirror, which notes the Prime Minister and Chancellor are currently on holidays.

Critics accuse BoE Governor Andrew Bailey of being “asleep at the wheel”, reports the Daily Mail, which adds the banker is “running out of credit”.

And the Daily Star acknowledges the “bad news” about the economy but also carries “good news” that the Premier League resumes tonight.