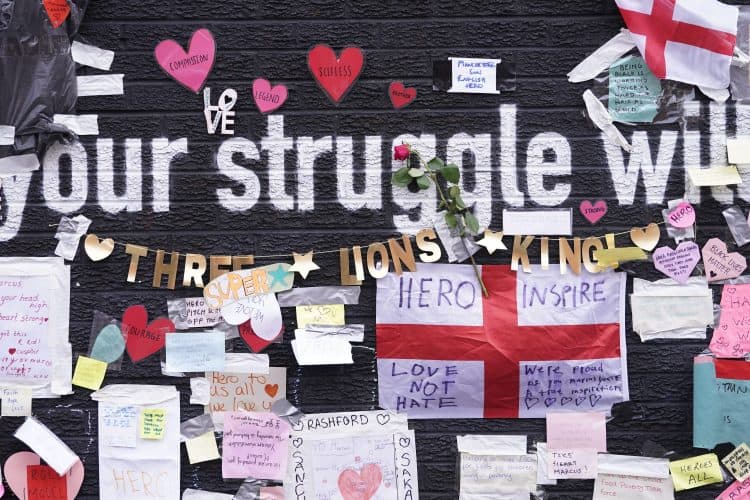 A vandalised mural of England footballer Marcus Rashford has become a symbol of love and solidarity, the man behind the street artwork said after hundreds of well-wishers covered it with anti-racism messages of support.

The mural in south Manchester, was defaced within hours of England’s loss to Italy in the Euro 2020 final, in what police are treating as a racist incident.

Ed Wellard, the founder Withington Walls, the community street art project behind the mural, covered the graffiti up until Tuesday morning when the artist returned to repair the damage – watched by dozens of supportive locals.

The mural, on the side of a cafe in Withington, has seen hundreds of visitors leaving notes, flags, flowers and banners in support of Rashford.

As street artist Akse P19 put the finishing touches to the repairs to his mural, watched by dozens of locals and onlookers, Mr Wellard said: “There’s been an outpouring of kind of love and solidarity and it’s really heartening.

“It’s a lovely thing isn’t it? I watched the footage with my friends and saw those penalties being missed and all I felt was empathy and compassion for those young men, they’ve done themselves proud, on and off the pitch.

“I gave my 11-year-old boy a hug because he was crying and I wanted to give the players a hug.”

Half a million mark

Meanwhile, a petition calling for a ban on all racists entering football matches in England has surpassed half a million signatures.

The authors, who said anyone behind such disgusting behaviour is not welcome in following the team, called for the Football Association and the government to work together now to ban all those who have carried out racist abuse, online or offline, from all football matches in England for life.

“Our England team stood up for all of us – now we must stand up for them,” they wrote.

A separate tweet by Tyrone Mings is also nearing half a million likes as Twitter users expressed a show of solidarity.

In it, the Aston Villa defender pointed the finger at home secretary Priti Patel for “stoking the fire” at the beginning of the tournament.

He said you “can’t then pretend to be disgusted when the very thing we’re campaigning against happens”, to an outpouring of support.

Even GB News, which conducted the initial interview with Patel, found itself getting behind victimised England players.

Guto Harri declared ‘racism has no place’ in Britain as he took the knee on the show.

Related: ‘Don’t buy the Sun’: Redtop tells England players ‘we’ve got your back’