"It was a bat foraging area, woodpeckers and bird nesting site and loss of wildlife. Habitat cannot be replaced." 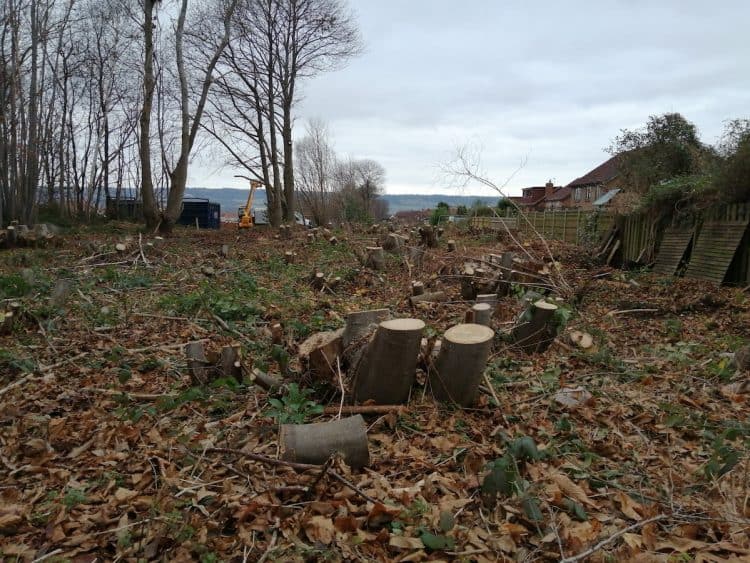 The chopping down of a bat habitat of around 150 trees to stop “excessive shading in gardens” has triggered fury.

The large number of trees along a busy footpath between Allington and Maidstone Hospital in Kent were felled to appease neighbouring residents, according to the building firm that owns the land.

But others who use the public right of way say they are “universally appalled” by the chestnut trees being felled and the destruction of a habitat used by bats, woodpeckers, squirrels and other animals.

Croudace Homes, which owns the land, put up a notice last month to say the footpath was temporarily closed while coppicing work was undertaken.

But when it reopened, residents were distraught that instead of woodland management the trees were felled.

Angela Poletti, chairman of the New Allington Action Group, said: “This public right of way is heavily used by people going to the hospital, by school children and by dog walkers.

“Judging by comments on social media they have been universally appalled by what they’ve seen.

“The trees have not been coppiced – they have been felled. It looks absolutely awful!”

She added: “Coppicing as expected would have been acceptable, but this is just destruction.
.
“No ecology or bat survey was provided and all protected trees removed.

“Maidstone Borough Council should never have approved this destruction to a wildlife area.

“It was a bat foraging area, woodpeckers and bird nesting site and loss of wildlife. Habitat cannot be replaced”

James Willis, co-ordinator of the MERLin campaign, which seeks to ensure that green corridors are left for wildlife, was equally upset.

He said: “It does look bad. What this proves is that there is an urgent need for Maidstone council and other local authorities to get together to carry out a comprehensive ecological review of the whole area to ensure important green spaces are properly protected.”

Andrew Johnson, a spokesman for Croudace, which has been building its Hermitage Park development, said: “Croudace Homes is currently carrying out coppicing and tree management works to the woodland adjacent to Phase 3 of our development.

“This is required to ensure safety of the users of the footpath through the woodland and to alleviate concerns from local residents with regards to encroachment over boundaries and excessive shading of the gardens of residential properties to the east of the woodland.

“The work is being carried out in accordance with a TPO application which has been approved by Maidstone Borough Council.”

“The trees are Sweet Chestnut coppice which are typically managed by re-coppicing on a cycle of approximately 15 years.

“Coppicing is a traditional method of managing certain species such as Sweet Chestnut in order to promote the formation of multiple stems from near ground-level.

“Despite its drastic appearance, coppicing has many benefits, such as increasing the lifespan of the trees and periodically allowing more light to the woodland floor, which increases biodiversity.

“It is fully expected that the trees will successfully regenerate.

“The Council therefore considered that the proposal to coppice the trees accords with good woodland management principles and therefore granted consent in accordance with government guidance for Tree Preservation Orders.

“The proposals included recommendations for the contractors carrying out the works in accordance with British Standards relating to bats in trees and to seek advice of ecologists before any work was undertaken.

“It is therefore the contractor’s responsibility to ensure wildlife legislation is not breached.”