A colourful bird-like dinosaur that was as big as a man has been identified by scientists. The blue and beige feathered creature stalked the Canadian ‘badlands’ of Alberta 71 million years ago. Its remains had been dug up over the years in what is now Red Deer River Valley – a famous dinosaur graveyard – […] 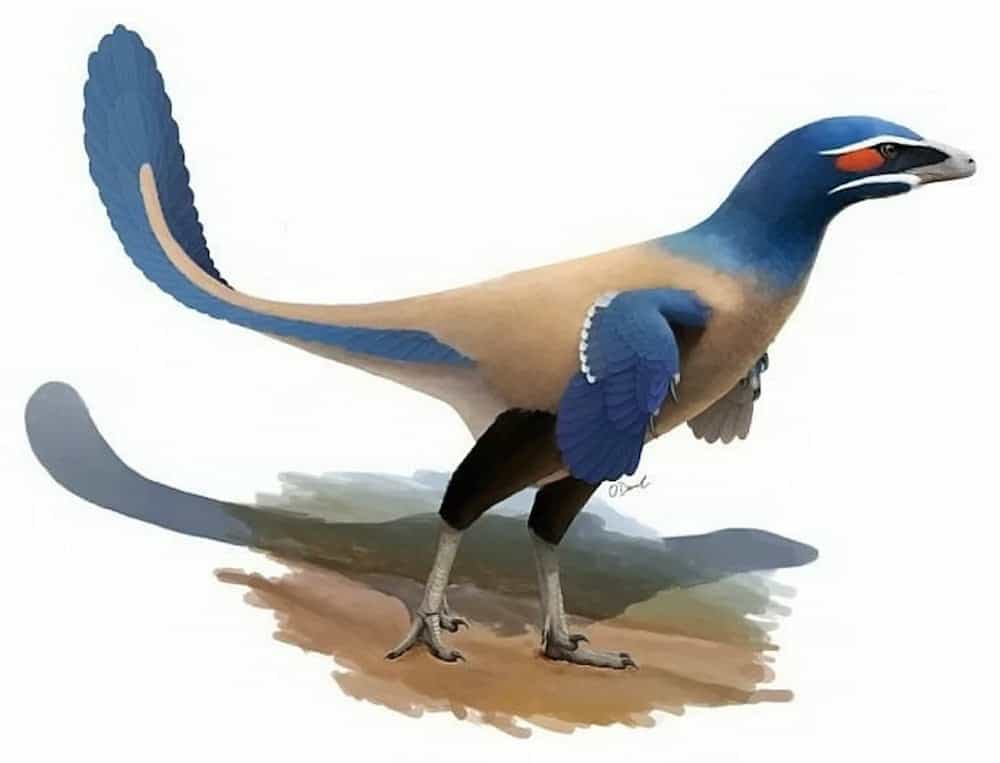 A colourful bird-like dinosaur that was as big as a man has been identified by scientists.

The blue and beige feathered creature stalked the Canadian ‘badlands’ of Alberta 71 million years ago.

Its remains had been dug up over the years in what is now Red Deer River Valley – a famous dinosaur graveyard – but it’s only now that a true picture of it has emerged.

Both dinosaurs walked on two legs, were covered in feathers – and were about the size of a person.

Troodon is believed to be the smartest dinosaur that ever lived. It had a large brain – proportionally bigger than those found in living reptiles.

So it may have been as intelligent as modern birds which are more similar in brain size.

Now comparisons of bones forming the top of the head reveal Albertavenator had a distinctively shorter and more robust skull than Troodon – its famously brainy relative.

“We were lucky to have a critical piece of the skull that allowed us to distinguish Albertaventaor as a new species.”

“We hope to find a more complete skeleton of Albertavenator in the future as this would tell us so much more about this fascinating animal.”

Identifying new species from fragmentary fossils is a challenge. Complicating matters were the hundreds of isolated teeth discovered in Alberta and previously attributed to Troodon.

Teeth from a jaw that likely belongs to Albertavenator appears very similar to the those of Troodon – making them unusable for distinguishing between the species.

The identification of a new species of troodontid in the Late Cretaceous of North America suggests the diversity of small dinosaurs towards the end of their existence is likely underestimated.

This is because of the difficulty of identifying species from fragmentary fossils, reports the Canadian Journal of Earth Sciences.

Thomas Cullen, a Ph.D. student of Prof Evans at Toronto University, said: “It was only through our detailed anatomical and statistical comparisons of the skull bones we were able to distinguish between Albertavenator and Troodon.”

The bones of Albertavenator were found in the badlands surrounding the Royal Tyrrell Museum, which Dr Currie played a key role in establishing in the early 1980s.

The rocks around the museum are the same age as some of the most fossiliferous rocks in the area of the newly erected Philip J. Currie Museum, also named in Dr. Currie’s honour.

Although Dr. Currie has also had a several dinosaurs named after him this is the first one from Alberta – where he has made his biggest impact.

The fossils of Albertavenator studied by Prof Evans and his team are housed in the collections of the Royal Tyrrell Museum.

This is another example of a new species of dinosaur being discovered by re-examining museum research collections, which continually add to our understanding of the evolution of life on Earth.