The surface of the lake got covered in a thick layer of waste ranging from plastics to rusty metal scraps, tree trunks and even reportedly a coffin. 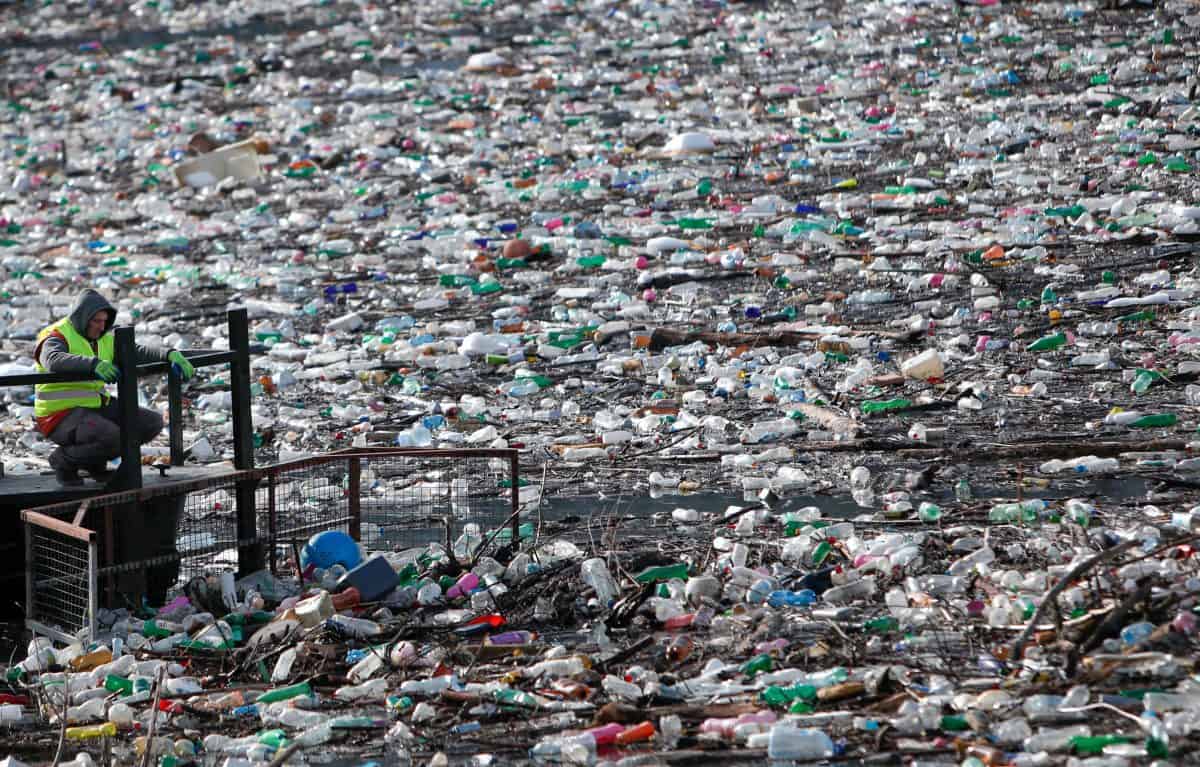 Environmentalists have warned that rivers of waste threaten ecosystems, wildlife and the health of humans in parts of the Balkans.

In one area of Serbia, trucks and building machines could be seen parked on a river dam – but not for construction work. Instead, huge cranes are being used to clear tons of rubbish crammed at the foot of the power plant.

Serbia and other Balkan nations are overwhelmed by communal waste after decades of neglect and lack of efficient waste-management policies in the countries.

Burning rubbish dumps can be seen from the roads, plastic bags are hanging from trees and islands of waste were spotted floating down the region’s rivers. The problem usually comes into focus in winter, when swollen waters sweep over landfills, pushing the rubbish towards hydropower dams.

This has been the case at the Potpec accumulation lake near the power plant after a spate of rainy and snowy weather in December and early January. The surface of the lake got covered in a thick layer of waste ranging from plastics to rusty metal scraps, tree trunks and even reportedly a coffin.

The rubbish has been swept downstream by the Lim River, which feeds the Potpec dam. The Lim originates in neighbouring Montenegro, passing through several municipalities and their waste sites in both Montenegro and Serbia.

“Based on a recent study, we found out that in these towns, in the five municipalities in Montenegro and three in Serbia, about 45,000 tons of waste are collected (per year),” said Predrag Saponjic, the Lim River hydropower plant system manager.

Looking at the rubbish-strewn lake, he added that “even if only a fraction of that waste ends up in the Lim River, we get this”.

Environmentalists in the Balkans have warned that because most landfills are not managed properly they leak toxic materials into rivers, threatening ecosystems and wildlife.

Bosnia too has reported a rubbish pile-up that endangers the hydroelectric dam on the Drina River, near the eastern town of Visegrad. The Lim is one of the tributaries of the Drina, which makes their waterways — and rubbish flows — closely connected.

The two emerald-coloured rivers — the Drina flows along the border between Serbia and Bosnia — during summer are favoured by adventurers and water rafters who enjoy the winding waterways and seemingly pristine nature.

While Balkan nations have been struggling to recover following a series of wars and crises in the 1990s, environmental issues often come last for the countries whose economies are lagging far behind the rest of Europe.

Jugoslav Jovanovic, from Serbia’s state-run Srbijavode company that is in charge of the country’s water system, put the waste problem down to “our neglect and lack of care”. Landfills are located too close to rivers and are overfilled rather than closed down over the years, he warned.

“If we find ourselves forced to do this year after year, then that’s not really a solution,” he said of the clearing operation. “We must find common ground and solve this by joining forces.”

Serbia, Montenegro and Bosnia have held meetings on the issue but little has been done. The Balkan countries also face other environmental emergencies, including dangerous levels of air pollution in many cities.

Experts predict the clearing of Potpec lake will take a few weeks, depending on the weather. However, all the rubbish from the water will end up again on a landfill in western Serbia.