The Bill also gives Border Force officers powers to turn migrants away from the UK while at sea, and makes it a criminal offence to knowingly arrive in the UK without permission. 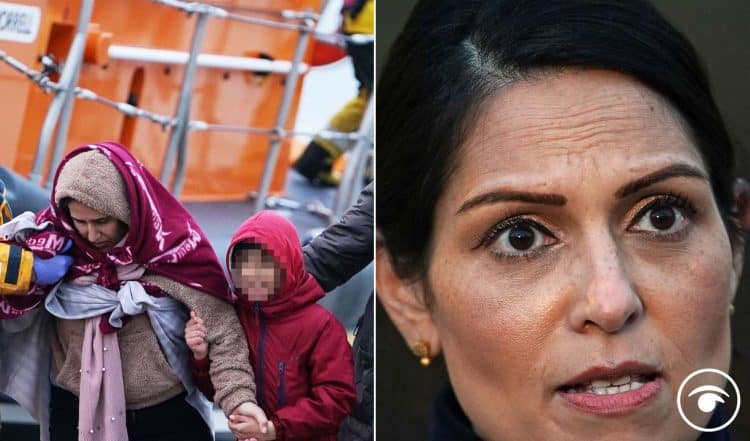 The Government’s flagship immigration legislation has cleared the House of Commons amid chaotic scenes and claims of “anti-democratic” tactics from opposition MPs.

MPs gave the Nationality and Borders Bill a third reading by 298 votes to 231, majority 67, thereby allowing it to progress to the House of Lords.

But the third reading debate was squeezed to around nine minutes after delays during voting on amendments reduced further the already limited time available.

At one stage she threatened to throw out an SNP MP for repeatedly trying to raise a point of order, while Home Secretary Priti Patel added: “It is appalling that we’ve seen these delaying tactics today.”

Conservative MP Lee Anderson (Ashfield) also said: “The disgraceful tactics of hiding in the toilets by the rabble opposite to delay democracy is an attack on democracy.”

The Bill seeks to curb English Channel crossings and change how asylum claims are processed.

It includes clauses to allow the UK to be able to send asylum seekers to a “safe third country” and to submit claims at a “designated place” determined by the Secretary of State.

Officials believe the Bill gives the potential to allow for offshore processing centres to be set up overseas, akin to policies used in Australia.

The Bill also gives Border Force officers powers to turn migrants away from the UK while at sea, and makes it a criminal offence to knowingly arrive in the UK without permission – with the maximum sentence for those entering the country unlawfully rising from six months’ imprisonment to four years.

For the first time, how someone enters the UK – legally or “illegally” – will have an impact on how their asylum claim progresses and on their status in the UK if that claim is successful.

Ms Patel told MPs: “This Bill introduces the most significant overhaul of our asylum system in over two decades and it is a shame members of this House resort to delaying tactics to delay this debate.

“Our Bill will bring a new comprehensive, firm but fair, and long-term plan that seeks to address the challenge of illegal migration facilitated by serious organised criminals exploiting people and profiting from human misery.”

Ms Patel said not supporting the Bill would lead to “more people smuggling, more dangerous crossings, which will compromise our national interests and our public safety”.

Pointing to both Labour and SNP MPs, she added: “Members on both sides of the House have no answers to this Bill. We are the ones that want to control illegal migration.

“We want to take back control of our borders, the party opposite have opposed deportation of … murderers and rapists. We can absolutely say that we do not, but they do.”