Organisers of the pro-Ukraine march described it as "one of the greatest acts of solidarity in British history". 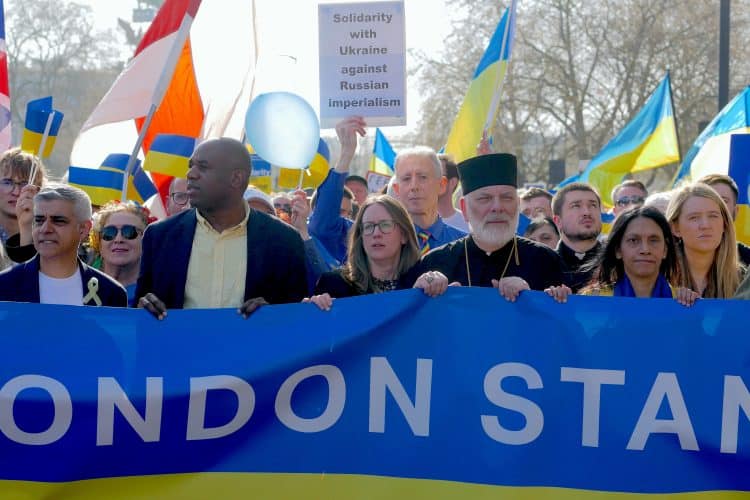 More than 150,000 Londoners took to the streets yesterday in support of Ukraine, in what organisers have hailed as “one of the greatest and most historic acts of solidarity”.

A huge sea of protesters, draped in blue and yellow colours, started near Hyde Park on Saturday, before snaking through the roads towards Trafalgar Square.

They chanted “stand with Ukraine” and “stop the war”, with roads being closed off and traffic stopped.

The crowd, many from Ukraine, also marched beneath Yoko Ono’s Imagine Peace message on an electronic billboard in Piccadilly.

Cheers rang out at Trafalgar Square as a message from Ukraine president Volodymyr Zelensky was played on a huge screen in front of Nelson’s Column.

The march, organised by the European Movement and Sadiq Khan, the Mayor of London, was injected with momentum after Zelensky appealed to people across the world to take to the streets earlier this week.

“Our assessment is that with more than 150,000 people turning out, there can be no doubt that this is one of the greatest and most historic acts of solidarity this country has ever seen,” a spokesperson for the European Movement said.

That would make the rally the tenth most-attended demonstration in British history, behind the marches against wars in Iraq, Afghanistan and Vietnam, and the anti-Brexit marches. Organisers said they were “overwhelmed” by the turnout.

Labour’s shadow foreign secretary David Lammy, who was also in attendance, led a chant of “stand with Ukraine”.

He said: “We come here to send a message to the beautiful people of Ukraine that we are with you in this fight.”

Lammy also called for “dirty Russian money” that has “polluted” the UK economy to “end”.

‘We’re on their side’

Khan said: “It has been heartbreaking to watch this unprovoked and shocking attack unfold against the Ukraine people over the last few weeks.

“Our capital has a long history of providing sanctuary to those fleeing conflict, and I’m proud that Londoners have already shown their willingness to help by donating money to charities and signing up to house refugees.

“Together we marched and united in Trafalgar Square to show our support for our friends in Ukraine and call for an urgent end to this atrocity.”

Anna Bird, CEO of the European Movement, added: “It’s easy for opponents of peace to say that Putin doesn’t care about what happened in Trafalgar Square, but the world is watching. The people of Ukraine are listening and looking for hope. They need to know we’re on their side.

“I am absolutely certain of this: The only route to a peaceful future is one where we unite with our neighbours in Europe and around the world.

“This historic march told the world that Ukraine is with us, and we are with them. Today and each day until Ukraine prevails.”

Related: UK will lift sanctions on Russia – if THESE demands are met