“I’m glad we’re using his rent to pay the fines of the people who are risking their livelihoods, reputations and personal safety to give the rest of us hope that change is possible.” 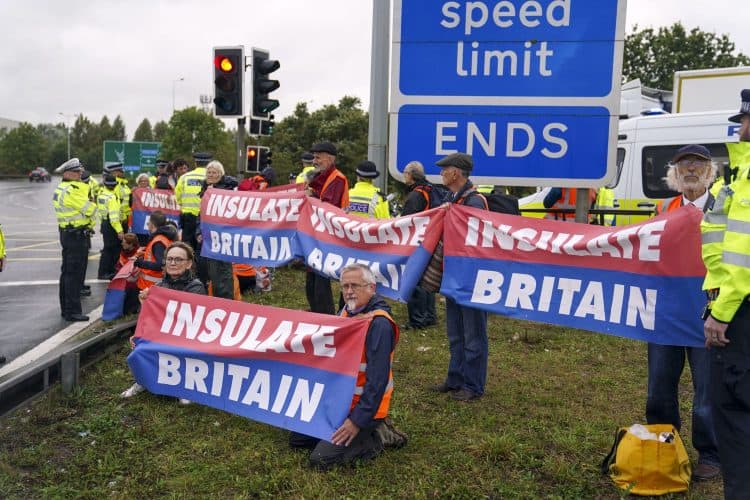 The Environment Secretary has been unwittingly handing public money to supporters of campaign group Insulate Britain who bought his constituency office, it has been revealed.

George Eustice’s office in Camborne, Cornwall, was bought in October by a coalition of investors who have since been donating his rent money to help cover the legal fees of the group’s activists.

One of the investors, grandmother of three Brenda Shrewsbury, said she hoped the move would “inspire others to do what they can” in the fight against the climate and energy crisis.

Mr Eustice’s spokesperson responded by saying “we live in a free country”, and added that landlords and tenants do not need to share the same political views.

A total of 30 people provided the £51,000 to acquire the ground-floor property under the company name Cawton – which is an anagram of Act Now, one of Extinction Rebellion’s three key demands.

They have so far received £2,820 in rent, all of which has gone towards the defence costs of the campaign’s supporters.

They will continue to get £5,640 plus VAT a year from Mr Eustice.

Since November, 28 Insulate Britain members have been charged with contempt of court, with 25 found guilty. Of those 13 have been sent to prison and 12 received suspended prison sentences.

The courts have so far awarded costs of £84,000 against Insulate Britain defendants, with a further claim of £159,216 from lawyers acting for the Government.

Ms Shrewsbury, 65, from Budock Water near Falmouth, said: “The rent from George’s gaff is tiny compared with the costs faced by the individuals that have been persecuted by the Government for demanding action on home insulation, but I hope that this move will inspire others to do what they can. We need to come together and act now on the climate emergency.

“Insulate Britain had it right and the Government and media crucified them for it. Now we’re all feeling the pain of the home energy crisis, while the oil and gas companies make windfall profits and some ignorant MPs want to roll back progress on reducing our emissions.”

Another of the investors, Sally Wright, a mother of three from St Day near Redruth, said: “I’m glad we’re using his rent to pay the fines of the people who are risking their livelihoods, reputations and personal safety to give the rest of us hope that change is possible.”

The rent is being paid with taxpayers’ money through the Independent Parliamentary Standards Authority (IPSA), a public body that regulates and administers the business costs of MPs.

The PA news agency has seen documents that confirm Cawton’s ownership of the property, and Mr Eustice’s office said it was aware the office had been sold to the company and that there had been no change in the terms of the tenancy.

Insulate Britain made headlines last year when activists blockaded the M25 and other major roads, calling on the Government to retrofit all homes to make them energy-efficient.

Mr Eustice has previously spoken out against the group, calling it “highly irresponsible”, and backed the Government taking legal action against the activists last year in the form of an injunction that would “give police stronger powers to be able to intervene pre-emptively to stop” the protests.

On Thursday, the minister’s spokesperson said: “We live in a free country and investors are free to invest in property irrespective of their political views.

“There is no law that requires a landlord and tenant to share the same political opinions.”