Lynn Hayter caused a stir when she appeared on Newsnight dressed in a dog collar, supporting Theresa May's Brexit plans. 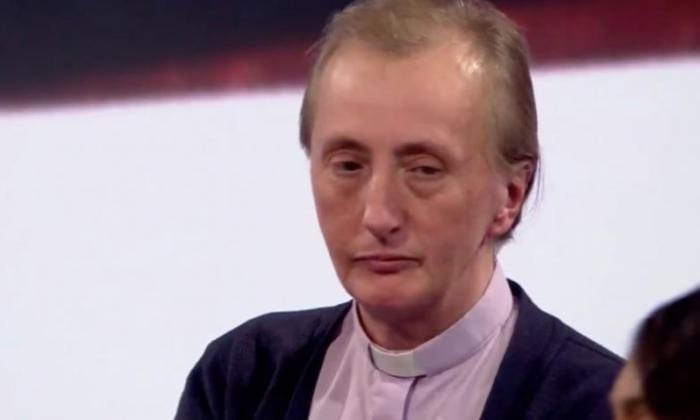 The ‘Newsnight Vicar’ has hit back at detractors that have labelled her a ‘fake’ – by saying it would be ‘stupid and crazy.’

Lynn Hayter caused a stir when she appeared on Newsnight dressed in a dog collar, supporting Theresa May’s Brexit plans.

Eagle-eyed viewers were quick to recognise Lynn as an extra who has starred in a string of TV shows and films, including Star Wars and EastEnders.

Speaking from behind the door of her modest north west London home, the 51-year-old said ‘of course’ she is a pastor.

She added that to lie about it on national TV would be ‘stupid and crazy.’

Lynn said: “You don’t need to know what church I belong to.”

The self-proclaimed pastor supported Theresa May’s Brexit plans on the BBC’s Newsnight panel on Monday, while sporting a dog collar.

But a flood of viewers’ complaints followed, questioning her integrity after it appears she is also a jobbing actress and has starred as an extra in Star Wars and EastEnders.

Lynn, from Wembley, north west London, said: “I wouldn’t be on TV lying about something like that, that’s stupid and crazy.

“A person can easily be a pastor and an actress at the same time.”

She denied the broadcaster had ‘dropped her in it’ after the backlash but refused to explain her position within her own church.

She said she attends an online church in America.

Lynn said: “I belong to a church in America that I attend online.

“I do not need to travel to attend my church.

“I have a pastor in America that covers me and I attend the church via their social media channels.”

Lynn spoke from behind the brown door of her yellow brick maisonette this morning.

She lives at the end of a residential street in a quiet cul-de-sac.

The curtains were drawn at the £300,000 property, and Lynn refused to leave.