By Joe Mellor, Deputy Editor   A brilliant picture has emerged on Twitter regarding a banner battle between a pro-Brexit and Remain neighbours. The two banners were hung on opposite balconies in Gospel Oak, North London. Frank Chalmers, 61, added to the words “Vote Leave” with a homemade slogan: “… If you want to cut […] 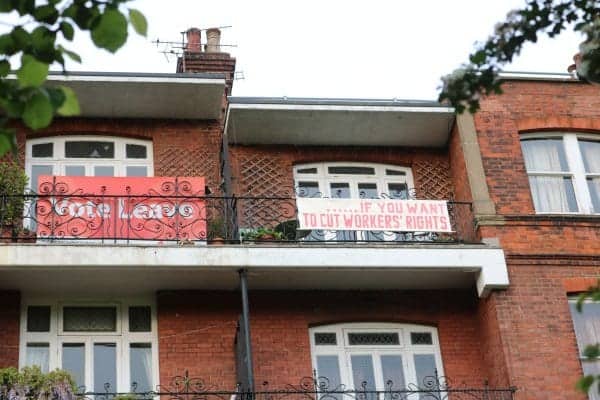 A brilliant picture has emerged on Twitter regarding a banner battle between a pro-Brexit and Remain neighbours.

The two banners were hung on opposite balconies in Gospel Oak, North London.

Frank Chalmers, 61, added to the words “Vote Leave” with a homemade slogan: “… If you want to cut workers’ rights.”

The image has proved an online hit after it was posted on Twitter by Frank’s son Malcolm, 33.

Unlike the Conservative party there is no bad blood between the neighbours.

Malcolm told the Evening Standard: “He gave the neighbours a bottle of wine as a peace offering.

“Everyone’s entitled to their opinion and my dad’s just the type of person who likes to make a point in a humorous manner.”

My parent’s neighbours have put up a large ‘Vote Leave’ sign. It seems my dad’s response is to get creative. #Remain pic.twitter.com/2TRffzkfD4